Another highlight of our recent holiday in Portugal was a day trip to the historic town of Sintra, a short train ride outside of Lisbon. We walked through the UNESCO World Heritage-listed centre of Sintra-Vila and up a winding, forested hill towards the beautiful Parque da Pena. Once there, Zoë enjoyed the amazing views of the shimmering Atlantic ocean from the ramparts of the 9th century Castelo dos Mouros (Moorish castle), while I rediscovered my fear of heights and clung onto a nearby boulder.

After I pulled myself together, we hiked to the summit of the hill to explore the Palàcio Nacional de Pena, a fantastical palace built up around a modest 16th century monastery. An example of Portuguese Romanticism, this multi-coloured magic kingdom boasts fairytale features like onion domed-turrets, a Fountain of the Small Birds, and a grotesque half man-half fish rendering of Triton.

Sintra was swarming with tourists, but well worth the trip regardless – its historical sites are fascinating, and its views are (apparently) stunning. Oh, and unless you’re ready for an hour-long trek up a steep hill, don’t follow in our footsteps – take the ten minute bus ride from the train station instead! 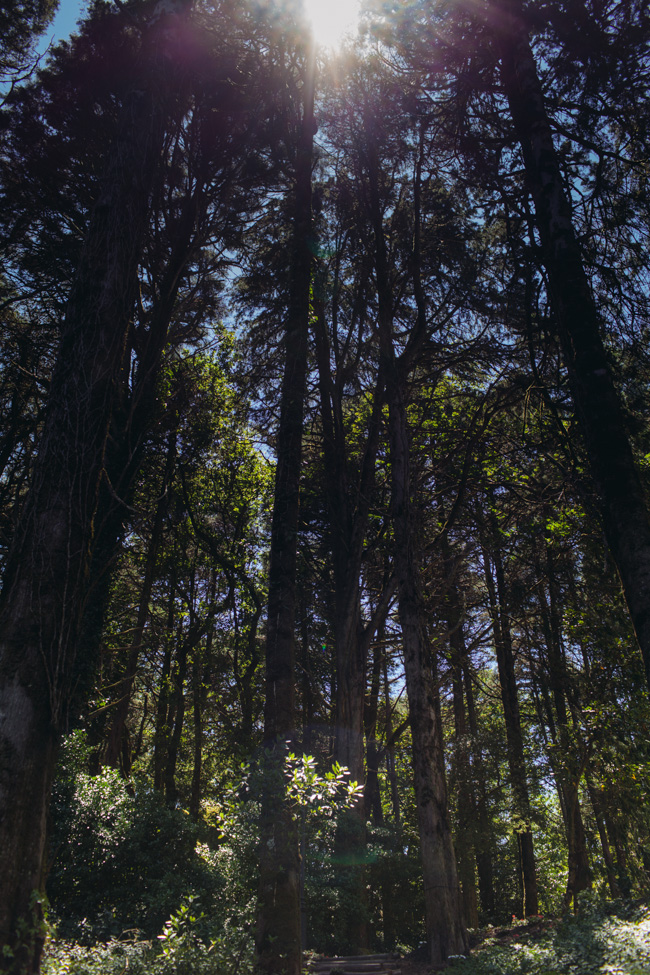 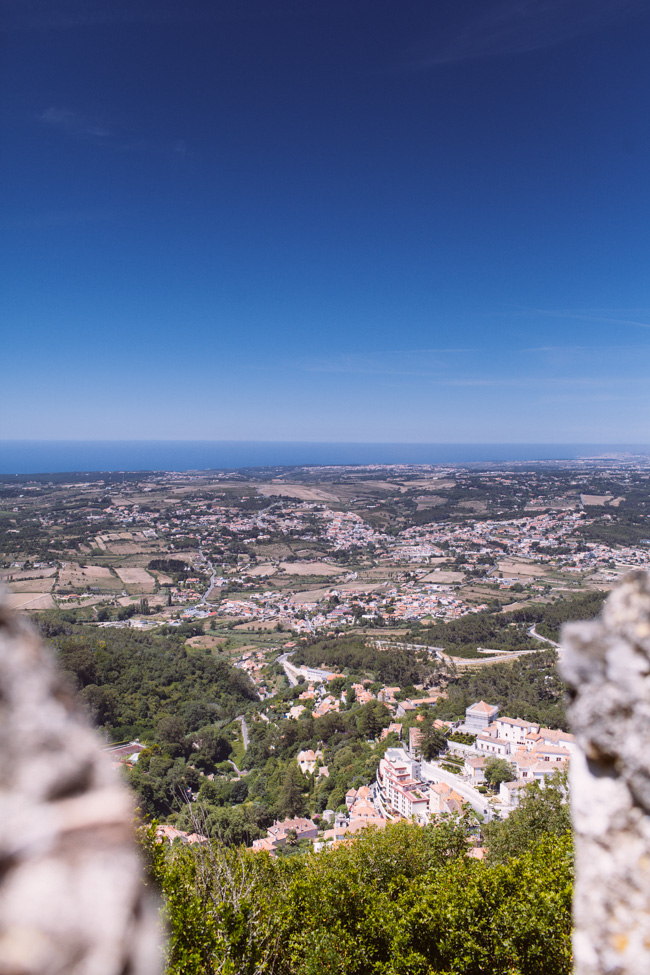 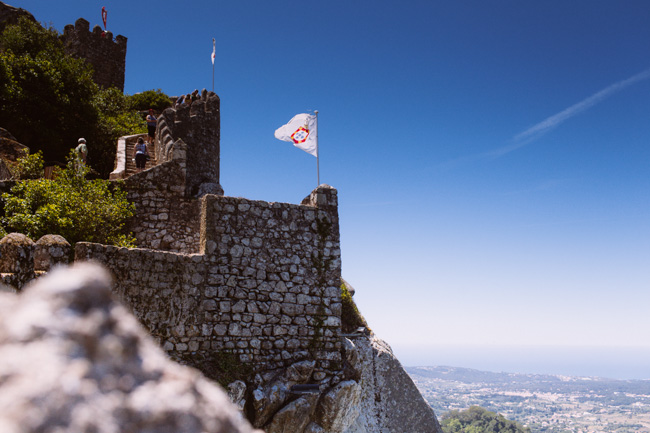 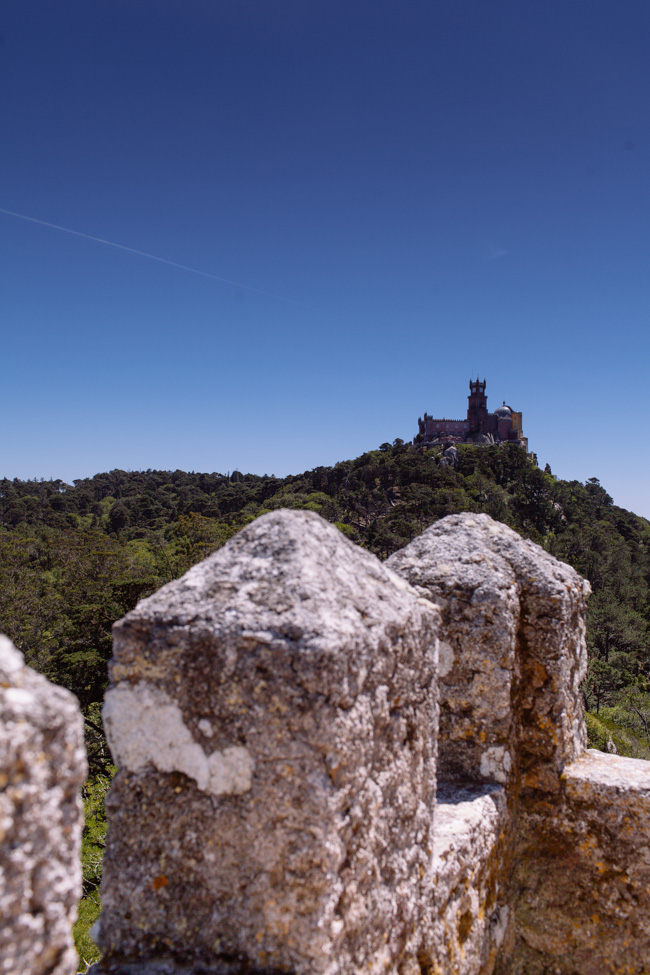 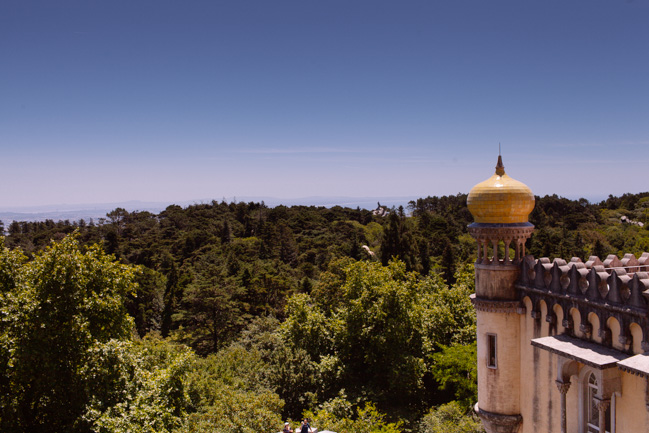 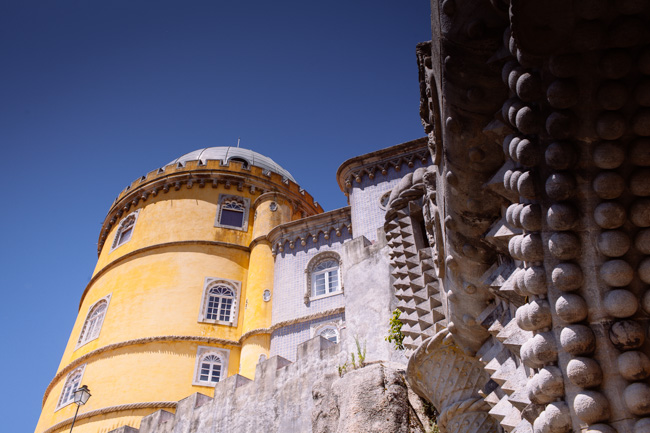 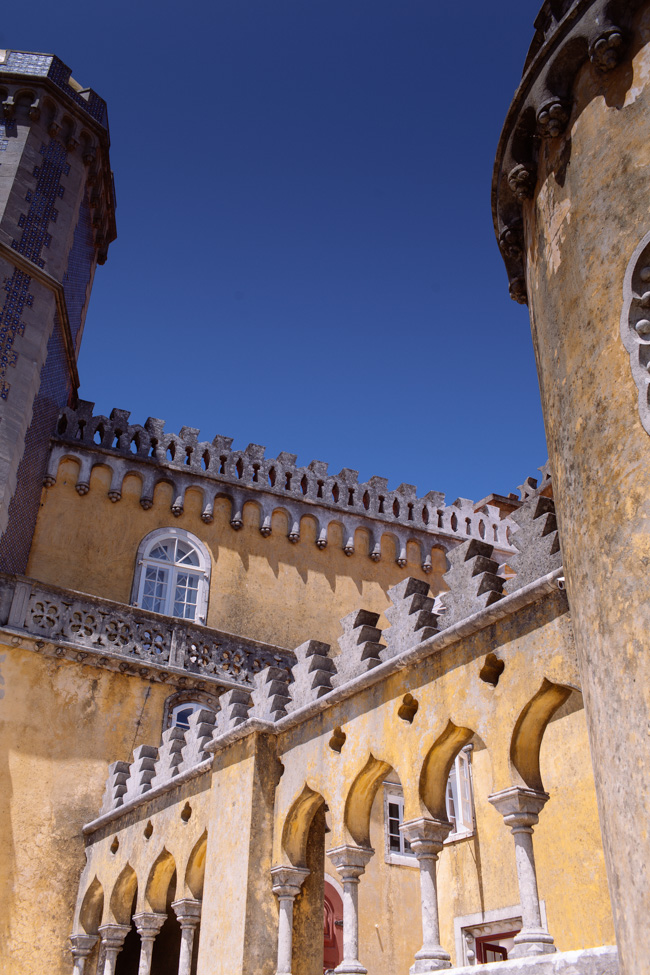 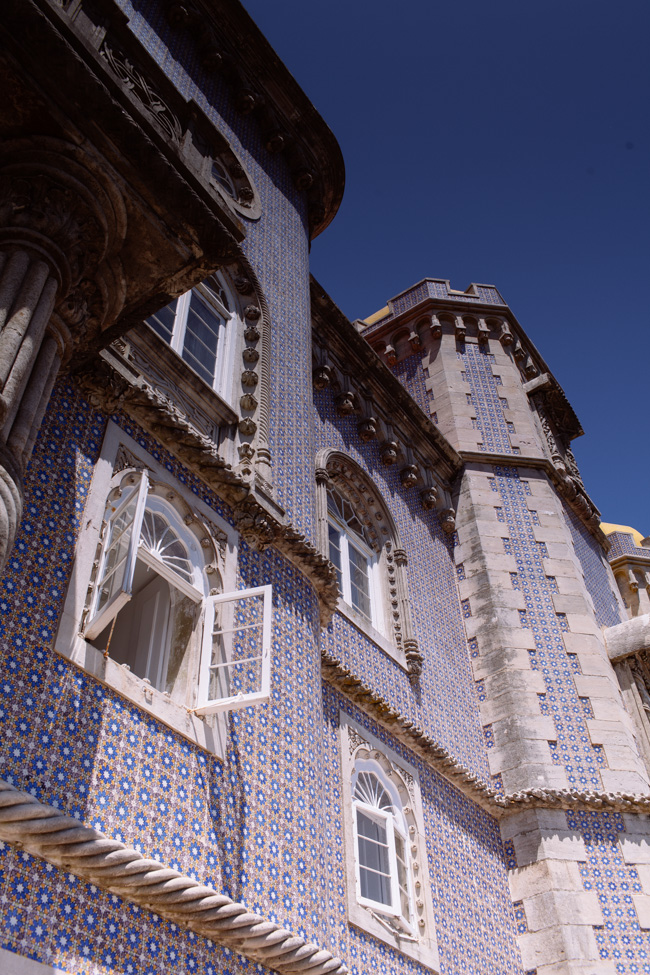 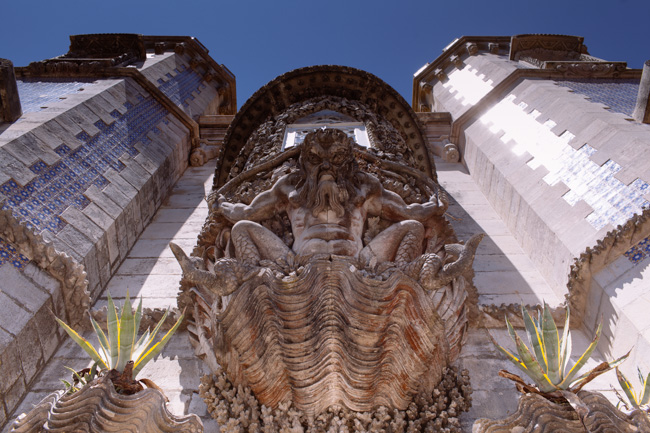 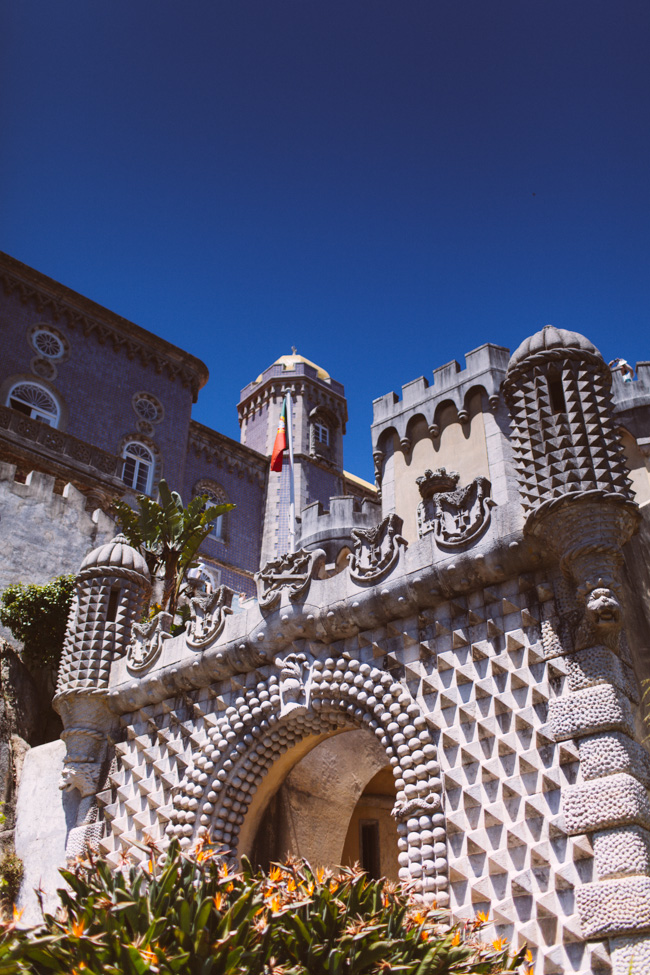 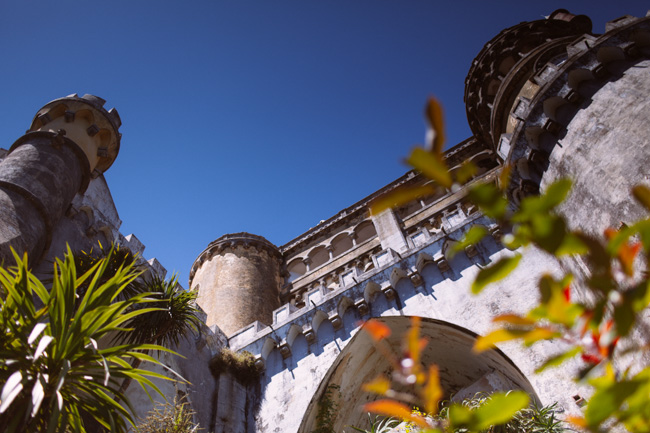 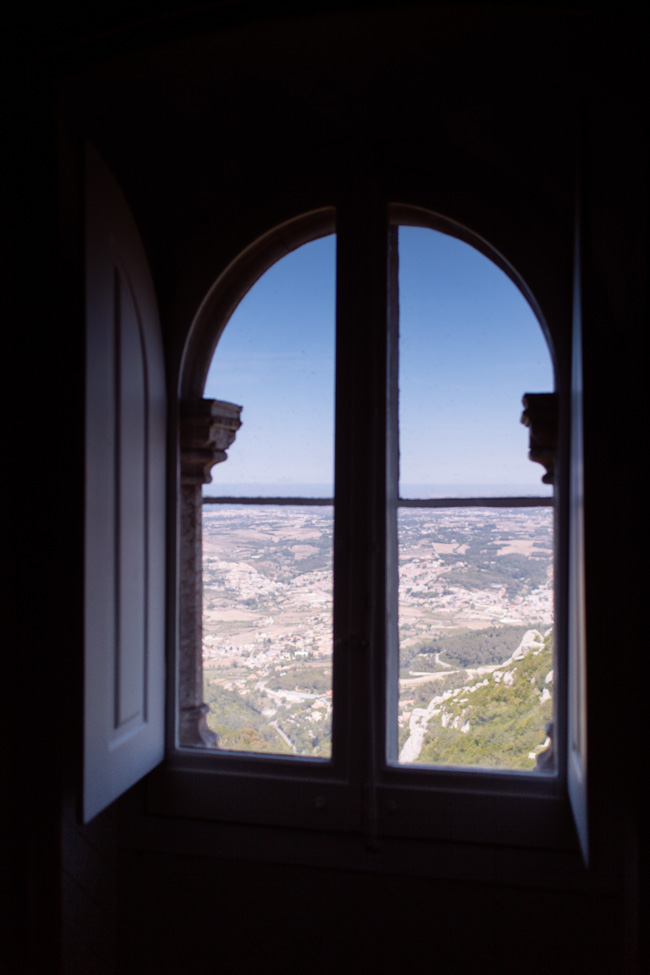 “Lisbon is the new Berlin.” That’s what we keep hearing from people who go to Portugal to escape the increasingly-hyped German capital, if only for a few days. However, we can neither confirm or deny that concept, as we went to Lisbon to top up on everything we can’t get here, like beaches, fresh seafood and ancient European history. We couldn’t tell you what the clubs are like, or the bars for that matter, and we didn’t bother to find out what the absolute best restaurants are; instead, we treated the city like one big highlight. We hiked up the city’s narrow, winding streets, marvelling at the buildings’ intricate tilework and walls painted colours we’ve never seen anywhere else, before taking a boat cruise along the Tagus river. If forced to dish out practical tips, we’d recommend getting lost in the labyrinthian Alfama, Lisbon’s oldest district, hiking to the top of the highest hill you can find to enjoy the views across the city and its beautiful bay, and hiring a car to get to some areas of real natural beauty. More on that later – for now, here are our impressions of Lisbon. Mein (Lamb of) Gott! This week we are dying both physically and musically as we spend the sabbath in the presence of Nintendocore leviathans HORSE The Band / northern UK mathcore heroes Rolo Tomassi, and also bear witness to dirty metal titans Lamb of God. Paint us excited.

This is all a walk in Gorlie park  for LoG frontman Randy Blythe, compared to the last 12 hellish months. Arrested in the Czech Republic for pushing a fan off stage and allegedly causing his subsequent death, Blythe spent five weeks in custody before finally being released and acquitted… with his band bankrupted by legal fees and forced to live under a bridge:

Sheesh! Now Lamb of God are back in Berlin for the first time in three years, in support of their seventh studio album, Resolution. Hopefully there will be time during the set for Mr. Blythe to give a reading from his forthcoming memoir – a literary circle pit if you will.

Joining them will be UK tech-metallers Sylosis, who hail from Berkshire – the “Hellmouth” of England – and hometown metalcore sprogs, War From A Harlots Mouth – you know, for the kids.

Lamb Of God are playing tomorrow night at C-Club Columbiadamm 9-11, 10965 Berlin. Tickets are still available so come along and please stop us from ordering Jäger, for the love of Korean Jesus!