We thought White Trash Fast Food was busy – until more than 30 of us descended on poor Room 77 to sample its generous selection of meaty treats. As it’s in our Kiez and stocks Newcastle Brown Ale, this comfy little hangout is familiar to us – every time I try another of its 19 burgers, and attempt to ignore the sub-Tom Waits “street musician” who is ALWAYS THERE.

Room 77 offers “warm beer, cold women”, burgers covered in everything from peanut butter to fried eggs to guacamole to hot sauce… just don’t ask for a veggie option! Judging by the results of our survey, people seemed pretty happy with their massive burgers/tacos (for our vegetarian), with the only real reservation being the service. The staff may have messed up a couple of orders and been a bit snippy at times, but hey, this is Berlin – and I think the place did amazingly well to cope with this many people on a random Wednesday.

Anyway, enough from me. Let’s see what our mahoosive judging panel had to say:

“They totally botched an order and made no effort to fix it. They lose points for customer service, but this is Berlin, rat bastards”

“Peanut butter on a burger = heaven. Soggy, messy… I’m glad no one was watching. Big and very satisfying. Service was great, considering our great size!”

“Loooved it! Cool music (not the street musician though…)”

“Yep, they actually tell you not to bother to order veggie burgers. That’s a first in Berlin! But then, the nachos were pretty good! And hot too! (sorry for the stain…)”

“Spiciness was good for being in Germany… wussies! Sauce for the fries was a bit weak, but Tabasco is a plus. All in all good experience, but a tad bit pricey for the product, especially in Berlin where you can get such decently-priced fast food” 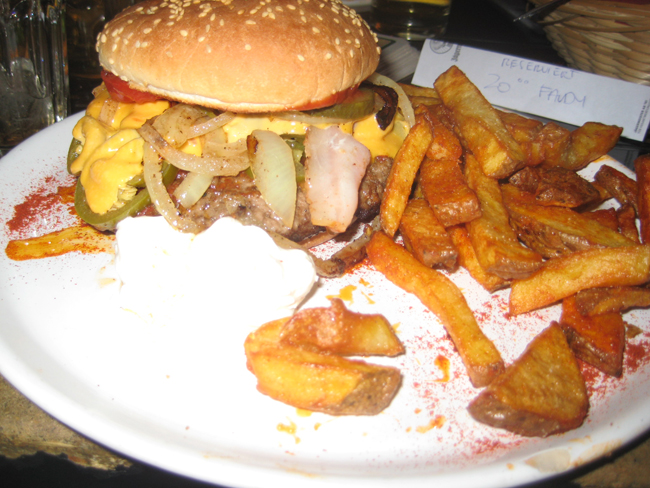 Photo courtesy of Nicole is the New Black

Having sampled and scored Berlin Burger International in Neukölln, this week the Berlin Burger Tour rolled into White Trash Fast Food. If you’ve never been, then shame on you – call yourself a travelling hipster expat twat?! Here’s how I described it to The Style King:

A riot of food, booze and rock n’ roll, this expat hangout is more adult playground than mere restaurant. Lined with gaudy Oriental decorations, the walls of White Trash Fast Food house a tattoo shop, smoking cinema, stage for live music and The Diamond Lounge, home of go-go dancers and DJs like Berlin-based electro shocker Peaches. Wash down the King Elvis Supreme Burger with super strong cocktails or a “bucket o’ beer” and (if you can still stand) rock the night away.

The connoisseurs among you should also note that, right now, the usual roster of entertainingly-named burgers (Marquis de Fuck burger with Fuck You Fries, anyone?) is joined by an octopus burger. The following photo and analysis comes courtesy of @superglaze: “Tender and tasty, but it could have done with a tartar sauce or something similar to bring the flavour out a bit more.”

We überliners were busy either being, or tending to the, ill, so we won’t bore you with our opinions about White Trash. Here instead are the scores and comments from our “judging panel”, and courtesy of Digital Cosmonaut, a couple of photos of them having fun without us

“The chili sauce on the meat patty was AWESOME. But to be honest I waited so long for the burger that anything would have tasted amazing – 45 minutes or so I think it was. Too long. So I didn’t tip. The waitress was not happy.”

“The place was cool, liked the atmopshere and obviously the great company. Food was alright and a bit expensive..”

“fries lukewarm, lower half of bread soggy and crumbling appart due to meat juice, Burger itself was good, meat was very good. i suggest adding a “service” category – service was dead slow, the waitress was crap, took over 30 minutes for drinks to come, took at least an hour for food to arrive.”

“Paying a cover for a restaurant? Pah!”

For the price I would have expected more.

“The burger was thick and meaty, well cooked on the outside, pink on the inside and a nice slab of melted cheese on top. I got extra mayo without a problem when I asked. The bun was too crumbly. It fell apart while I was trying to eat the burger and I ended up having to use a *gasp* knife and fork.”

About the Berlin Burger Tour

“The best burger in Berlin? Really?”

That question popped into our, and our fellow Berlin bloggers’, heads every time we read a post about yet another great burger joint here in our (adopted) hometown. So we decided to find out for ourselves, once and for all: where can you get the best burger in Berlin?

Organised by Digital Cosmonaut and Travels of Adam, a bunch of us set out on a tour of Berlin’s hamburger hotspots, to find out which is best. This here data nerd couldn’t help but get scientific, and draw up a survey that would give us a fair system of evaluating each place on its own meaty merits. Essentially, we scored according to flavour only – of the burger, the Pommes (fries/wedges) and the sauce and seasonings. I decided to record some other “data” that might help inform the final outcome: variety (the number of different burgers on offer), the availability of bio (organic) and vegetarian alternatives, and price (of a basic hamburger and fries).

A relative newcomer to the Berlin burger scene, BBI opened less than 18 months ago in Neukölln. A hole-in-the-wall at-counter-service place, it makes up for the lack of space inside with generous seating outside – which is not much use when you’ve brought along 20 bloggers and buddies, who are all trying to find shelter from the torrential rain. Despite the horrible weather, expectations were high, with some of the Americans in our group declaring this their favourite burger place in Berlin. So, without further ado, here are those all-important scores, and some comments from the “judging panel”:

“Burger too thin – would have preferred smaller diameter, thicker patty. Meat was a little dry.”

“Overpowering sauce meant I couldn’t taste the flavour of the meat.”

“Too much salad on the burger and the lettuce was a little bitter. The burger was a bit charred which would’ve been okay if it was thicker and more rare and juicy inside. There was supposed to be cheese on it but I am not sure if that is what that thin film was because I couldn’t taste it. But, was pretty good.”