Forget what plans you think you might have made for Halloween, shove that college kid Scream mask to the back of the wardrobe, burn your “sexy” devil costume, and don’t even think about bobbing for those damn apples, because this year Halloween in Berlin is going to get dark. Real dark. For the second year in a row, New York’s biggest DIY underground music and art festival returns to Berlin to make you shake your skeleton in Neukölln’s cavernous Cube club. The music ranges from new wave to post punk to industrial to grime, with heavyweights such as Pictureplane, Butterclock, Bestial Mouths, Lene Lovich, Dandi Wind, and Sad Lovers & Giants, to name just a few of the acts who will be invading your personal space throughout this year’s Drop Dead Festival. All Hallow’s Eve marks the opening of the five day event with a special Halloween PURGE party with highlights such as Deathface and Crim3s, a live drumming installation from Einstürzende Neubauten’s very own N.U. Unruh, a haunted house from MindPirates e.V., some ritual black magick art installations, and a hell of a lot of fog. If you are new to the world of the macabre, then perhaps these persuasive words from BlackBlackGold himself can lure your inner esoteric self to join the week-long, downright dirty (in all the good ways) party: “Lots of black. Lots of rare and interesting music. Lots of interesting haircuts.”Oh my gawd I haven’t see you in forEHHHHVVeerrr”. Vendors. Haunted houses.Multiple dance floors. Art and music installations. Broken glass. Fog. Spilled drinks. Toilets. Cab. Repeat for five days.“ Full event details can be found on the Drop Dead Festival website. 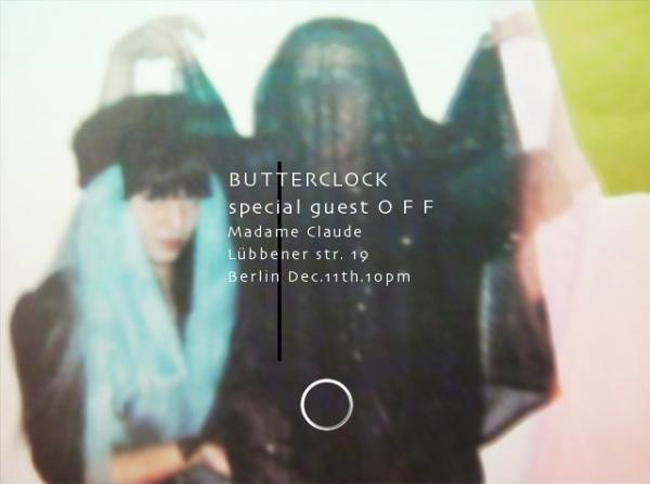 Madame Claude, with its Black Lodge aesthetic and furniture nailed to the ceiling, was an inspired venue choice for a showcase from an up-and-coming witch house artist. Depending on who you listen to, witch/haunted/drag/wevs is set to either turn electronic music upside-down or expose itself as just another triumph of style over substance.

Pulling back the curtain to reveal a chilly basement full of smoke and white noise looping from an unmanned laptop, first impressions of Paris’ ButterClock did nothing to dispel the skepticism cloaking her genre. When Laura Clock did appear, weighed down with chunky goth chic in shades of silver and black, her first synth stabs underwhelmed; the spectre of the de rigueur downtuned MC dancing behind her, face covered by a skull-emblazoned scarf, moved the crowd to sniggers. So far, so emperor’s new clothes.

And then the drums kicked. As unholy bottom-end rolled across the crowd, heads began to nod and bodies started to sway. Hacks may have given witch house short shrift, because it co-opts the beats and bad attitude of urban music and places them in a context far from its macho origins – but the gay and the fey, the whites and the women, the goths the indie kids… well, we deserve sub-bass too. Icy melody and a warped pop sensibility shone through the strobe-cast shadows, and with tracks like a cover of Jennifer Paige’s Crush ButterClock slowly unveiled its true identity: the crunk Portishead.

Polite applause, house lights up, scarves off – with the set over, a little bit of magic was lost. But watching the performers pack away their kit underlined the fact that – hype aside – witch house is (or can be) real music created by real artists. The likes of Fever Ray have started to wrestle electronic sounds away from dull men stood behind banks of equipment; if genre gems like ButterClock are allowed to shimmer, perhaps dance music can finally accept the marriage of theatricality and musicianship that rock and pop have long embraced.

[EDIT: since posting, we’ve found out that the MC was actually o F F, a Berlin-based artist we’d assumed we’d missed. That’s how opaque this scene is! Hear more from him over at his Soundcloud]

To hear more from ButterClock, visit her Soundcloud. If your finger’s so far from the pulse that you don’t even know what witch house is (pfff!), there is an excellent primer over at Soonnight. Check out the venue at MySpace – although berlin.unlike has prettier pictures. Speaking of pretty pictures…