So you’re new here. You’re walking around with your pint-sized Lonely Planet and you’re feeling Berlinspired. You want to move here and Berlintegrate.

Well, first you gotta hold up, put your thing down, flip it and kindly reverse it. Because before you move, you should know what you’re getting yourself into. You should know what kind of people you’re getting yourself into. And no matter how much you think you’re going to fully integrate yourself into the fabric of Berlin society, one fact remains: you will always be an expat. You’re going to end up getting to know the expat world a lot better than the German one.

So after you’re done visiting the Reichstag, eating currywurst and wandering around Lidl looking for Angela Merkel, here’s a little list of the kinds of expats you may end up meeting.

The One Who Actually Moved Here for His Career

“Are you a unicorn?!” is the first thing you want to ask this expat, who’s so rich they’re wiping their ass with real Euros, and the Euro hasn’t even collapsed yet! While the rest of your friends are living below Hartz IV, this expat is riding high, eating 16 Euro salads at the SoHo House, buying Acne jeans and taking weekend trips to Paris. After all, their apartment is 300 Euros and they’re making 1700 a month. The downside? They’re always working on some insane project at work and never sleeping. Zaha Hadid’s personal assistant yells at them every day. You comfort yourself in knowing they aren’t really absorbing the “Berlin vibe” but you’re actually jealous because you don’t know what in the actual fuck you are doing in this city and they kind of… do. 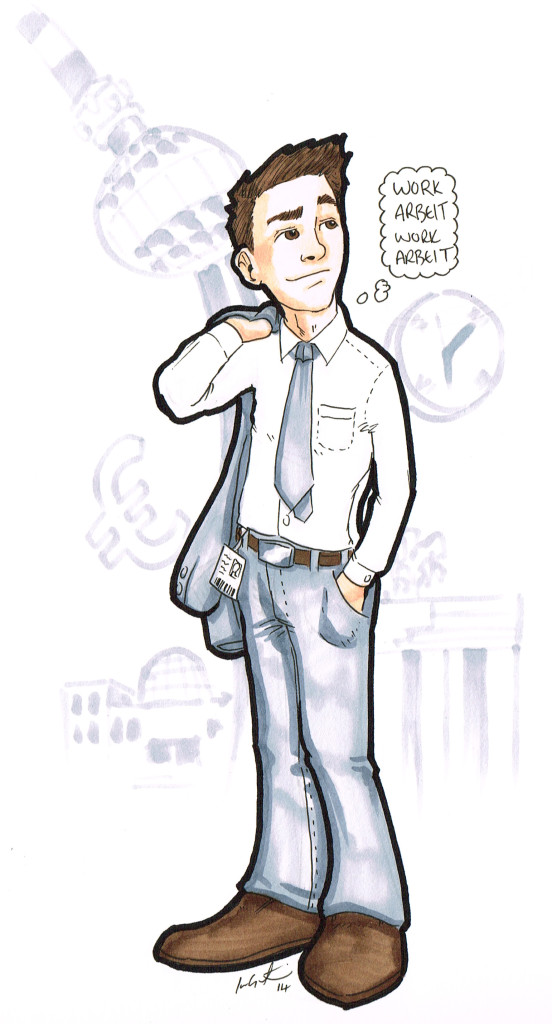 The One Obsessed with Full Immersion

Good luck ever hanging out with this expat! Full immersion friends have a hard time answering your calls because they’re just so, you know…immersed. Some of them won’t even speak English because their language instructor told them not to. Advice: just wait. Full-immersion is a phase that happens during the beginning of almost every jaunt across the pond. Eventually, they’ll get frustrated and overwhelmed and want to gab about the latest Modern Family episode with someone who understands irony and sarcasm.

Oh…my god. Can this expat please document my life? Clearly I need to read-up on things like white balance and exposure because my photos look like they were taken by an early 90′s webcam. These people are living a more charmed, aesthetically-beautiful existence than you and I.

The One Who’s Always Out

You get approximately 15 Facebook invites from this expat every day. They can’t hang out tonight because they’re listening to an Afro Klesmer band, attending the launch of a new gay magazine, having a midnight pillow-fight at Brandenburger Tor and then playing Wii Sports with 15 of your other friends. You should go, but it’s -5 and there’s a new episode of Parks and Recreation you want to download and you’re generally too lazy to do anything in the winter.

The One Who’s a DJ

Basically the same as above, except the invites are for concerts at Berghain and there’s no question they’re snorting mountains of coke. Also: this Portlandia clip.

Once this expat infiltrated a gang of Neo-Nazis then convinced them he was Roma and the Nazis were all “whaaaaaaa?” but now they’re cool with it and they’re actually BFFs. This dude also wants to take you to this brand new club set in Hitler’s actual bunker which wasn’t destroyed (that was a FAKE bunker) and it’s got everything: fake trash bimbos, women dressed as bonobos, lesbians with heavy flows. This dude is FUN.

DRONES! Nestle is force-feeding toxins to babies! Israel is a racist tumor that must be cut off! Coca-Cola is forcibly sterilizing African women! Walmart will enslave us all! Okay, so they’re probably right about that last part, but everything else this expat says makes a mockery of the liberal causes they try so hard to champion. They haven’t lived in the States for ten years but still believe they can speak authoritatively about how backwards and narrow-minded everyone who lives there is. They’ll never go back because they’ve reached the unshakable conclusion that living in Europe is morally superior. I actually don’t mind these people at all, because some of them are really knowledgeable. But it’s like, really? You’re NEVER going to go back? You don’t miss Hulu and Whole Foods even a LITTLE bit?

I don’t want to be mean. I would much rather live in a city with struggling artists than one with hella bankers. But, like, let’s be honest. You’re not making that much art. You’re mostly working at a cafe. When you’re not doing that, you’re partying and doing the odd graphic design project. I like you, as long as you don’t pretend you’re hot shit.

Steven Blum is a freelance writer and editor in Berlin. In the past, he’s written some things for The Stranger, Blackbook Magazine, Haaretz, Tablet Magazine, USAToday.com and the Seattle Post-Intelligencer. Follow him on Twitter @StevenBlum.