By Chloe Zeegen, an excerpt from the London-born author’s debut eBook, I love myself ok? A Berlin Trilogy, available now from mikrotext.

Hey, so when I was three my playschool had a nativity play and I was picked to be the angel I was freaking out like crying cos I didn’t want it you had to put this long white dress on I hated the thought of my head going through it all the mums were like wtf why are you freaking out all the other girls wish they could be angels and you’re gonna look so pretty but that shit just made me cry harder and all the other girls were like crying cos they wished they could be angels and it was like wah! little girl mutiny in a church hall in Pinner. When my mum picked me up she was like why don’t you wanna be the angel I can’t remember what I said something about the dress and I can’t remember what she said something about the dress but she wasn’t like wtf.

My mum had a pretty fucked childhood she was born in 1946 in Berlin to a seamstress single mother go figure what that was like. Her father was a Soviet doctor she never knew him cos her mother just hung out with him after the war for protection and politics, you know? I dunno how they met mate it’s not important my mother was always like what’s the point? when people asked if she’d ever track him down.

My mum was a tough little street kid you had to ask her permission to play on her turf she saw some pretty hardcore shit people were like killing themselves left right and centre once my mum and her sister were walking down the street in Neukölln cos that’s where they were from and the adults were like get back! get back! so of course they didn’t cos duh child psychology but I guess the adults were freaking out as it was dragged out of the water and I didn’t know this but Berlin has more bridges than Venice and the face was still there and the face was round and revealed something something close to despair and the sound brought the adults something close to despair and please no-one say it but it’s right fucking there and shit someone say what to do what to do when you’ve taken a thread and woven it through.

I was in Kreuzberg yesterday at the Straßenfest it was cool and it was raw I was with a girl she was cute and would send me texts full of smileys just like I like it. We go into a cafe and it’s full of barrels of nuts and olives and smells good. Some guy has a big bowl of white things and I’m like what are they and he’s like have some and I’m like I dunno they look weird and he’s like eat some and I look closely and they’re like the spent shells of seeds and the seeds have been eaten and the bowl is full of the shit you can’t eat and he looks at me with no expression and is like eat them. We turn round and the girl is like he’s taking the piss and I look down and we’re walking on loads of spent shells and we go out and the music’s loud and there’s lots to see and I look down and we’re walking on loads of spent shells.

When my mum was eight she got TB and had to go to some fucking weird hospital in the mountains and on Fridays they’d serve fish in jelly and she’d throw it up and they’d make her eat the vom and her family could visit but only through glass she was always cool with me when I was growing up she had no problem with trolls and games consoles and brands and babysitter books though she was pretty full-on about my grades. Trolls were fucking awesome they were so ugly and cute like pugs and they had friendly little eyes and their hair was a big bit of colour and they had loads of little outfits I even had a Jewish one that had a Star of David on it.

When I was ten the school I went to had a choice between religion and ethics lol I know and my dad was like a devout atheist so I was in the ethics class. The teacher was like this half-assed dumb-ass and one time she’s chatting about boys and girls and like what you should and shouldn’t do and it’s pissing me off and I think about who she is where she is why she is and I know just what to say and how to say it I can sense an open nerve I can see it spitting sparks I can feel it flicking round like an angry tail so I take it in my mouth put my little teeth round it and bite good and hard. She rises up goes a colour opens her mouth and loses it her eyes are like boiling and every word she says makes it worse and I just sit there in silence a smug little shit my face like ha ha. At the end the kids are like wtf and leave while she gives me one last bollocking then goes and finds my mum cos my mum was a teacher at the school fucking nightmare and was like “Your daughter has been disrupting my class” and my mum was like ha ha that woman’s an idiot.

My mum was like obsessed by the Holocaust she had shitloads of books and she would always wanna talk about it and she would get a lot of shit for it. When she taught her kids history they had a day where they all dressed up and spoke about who they were. It was hilarious there were loads of little Churchills Hitlers Mussolinis and Luxemburgs running round drinking Capri Suns and eating Haribo some of the other teachers were not into it at all but the kids seriously were.

When she was fifty she got really fucking sick that was before people had the internet so you’d spend your evenings in bewildered isolation it wasn’t skin cancer but you could see it from the outside turning in on itself like something unbridged. It took ages to operate cos things were complicated she was vomming the whole time and getting poisoned and what you know slips away I was sixteen a self-absorbed little fuck I failed her I would tip- toe past her room when I should have gone in and been like mum! fuck! are you scared? I love you! but instead
I gave her the gift of bitter isolation and her life’s love and her life’s work said sorry you’re wrong this is it now you’re alone and she checked her options realised they were shit and kept breaking down in tears.

It’s feeling like summer now I buy an ice cream and go for a walk to the Bierpinsel. There’s a fountain underneath it which doesn’t suit it and when I moved here it was full of ice. A family come up mother child grandmother. The kid is playing around in the fountain, trying to grab a handful of water. When he chucks it there are only a few droplets left but the grandmother acts it up nice and reacts like she’s just been hit by a water cannon. The kid’s delighted I laugh we all smile.

Give a gift of bitter isolation. Be the oligarch, your guy will call. He’s found something, you’re going to like it. You’re a path she’s degraded. See it sweep in. Look, a helicopter.

I go to a bar on Oranienstraße. There’s some random there and we chat for a bit but pretty soon he’s like just moved here have you? think you’re an artist? it’s people like you who are destroying Berlin you fucking tourist. I laugh in his face give him the finger but I don’t just give him the finger I pretend to run my tongue over it up and down to show him just how much of a creative little bitch I am and that really pisses him off and his friends are like leave it leave it.

When I get home my spell check is like wtf babe I can tell you’re trying to say something but I can’t figure out what. I consider uploading my entire fucking life to first-world-problems.com but I don’t because that’s bullshit. I reflect an image in Photoshop and it creates a skull. I Google ‘Facebook Star’ and take a screenshot because the returns are irrelevant. I update my status to find everlasting life and I tell you I mean it and I tell you it’s real. 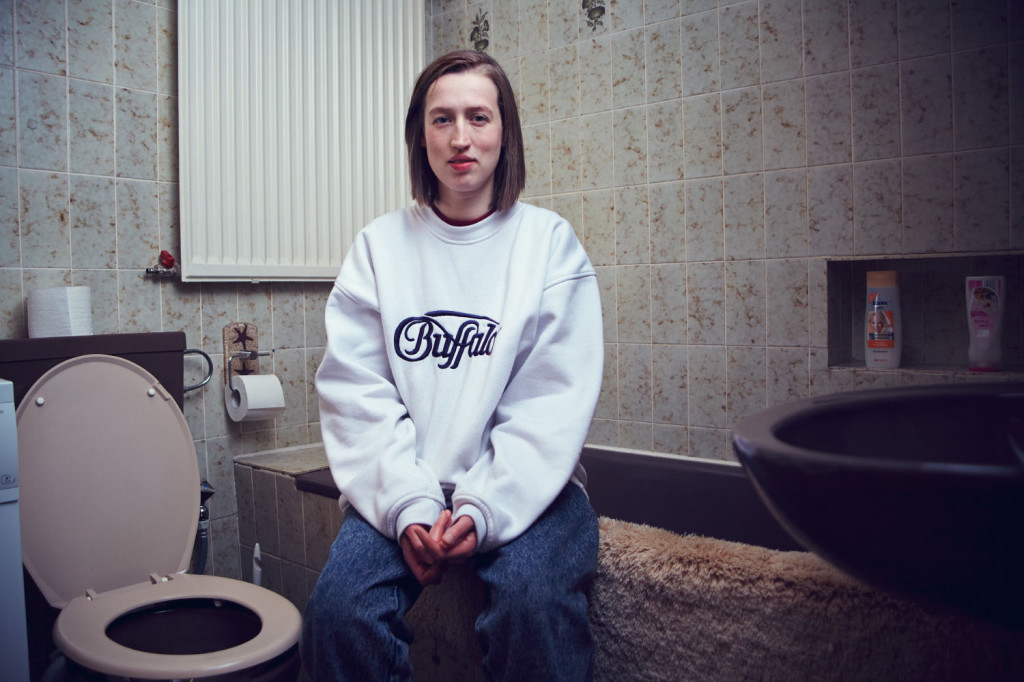 Chloe Zeegen will be reading with Kevin Junk at OLFE OMG LITERALLY SO LITERARY, 19hrs Sunday 23 Feb, Möbel-Olfe, Reichenberger Straße 177, 10999 Berlin. I love myself ok? A Berlin Trilogy is available from mikrotext.