The Brezel Company Berlin will be a familiar name to anyone who follows us on Facebook, Twitter or Instagram (@ZoNoPhoto). For weeks we’ve been posting photos of the restaurant and take away bakery’s breakfast and lunch specials…  everything except their eponymous prezels. While we can recommend these oven-fresh delights, we go for the big brunches – including a pretty decent Full English, and diabetes-inducing Canadian pancakes – and the delicious seafood pasta dishes that you can always find on their blackboard. While we’re no experts, we’ve been told that Brezel Company do pretty authentic Southern German cuisine (käsespätzle, anyone?), and the reasonable prices and location – on Neukölln’s schön Friedelstrasse – keep us going back for more. Part of the weekend never dies! Keep Sunday night ticking along nicely with this deep, lush house mix from Berlin native *SPIELKAMERAD* . Robert Zweiniger – whose alias is German for “playmate” – spent the last four years spinning at East London warehouse parties, but somehow we missed him! So we’re glad he’s back in his hometown, and will celebrate with this set that includes tracks from local legends BPitch Control and Mobilee, as well as dancefloor warmers from further afield.

I don’t know much about Berlin-based Swede Staffan Linzatti, except that one of his mixes has the awesome title “Forever Delayed – An Alternative Take on Watership Down (Mix for Inverted Audio)”. If you like the sound of timeless electronica (including Kraftwerk classic “Robots”) cut with clips of cartoon bunnies, then follow me down the rabbit hole…

Did you know that David Bowie once lived in Berlin? And did you know that he also recorded some music while he was here? I learnt these facts, and actual interesting ones too, when I went on Feeling Gloomy Berlin’s Bowie walking tour a couple of months back. It was THIS MUCH FUN: And now you have a chance to take a walk in the Thin White Duke’s platform boots, as we’re giving away a pair of free places on the Berlin Bowie Walk this Saturday (July 21st, other details here). To win two spots for you and a friend, all you have to do is tell us where you would like to go for a walk with David Bowie, and why you think he would like it. Leave your entry in the comments below, by 6pm Berlin time this Friday (July 20th), when we’ll pick our favourite and let the winner know by email.

For what it’s worth, we think Ziggy Stardust would like to go on a walkabout across the Australian desert, because it resembles the surface of MARS and is full of SPIDERS… :/ You must be able to beat that! But if you need some inspiration, check out Network Awesome, which is screening collections of Bowie’s live performances and stabs at acting. Good luck!!! 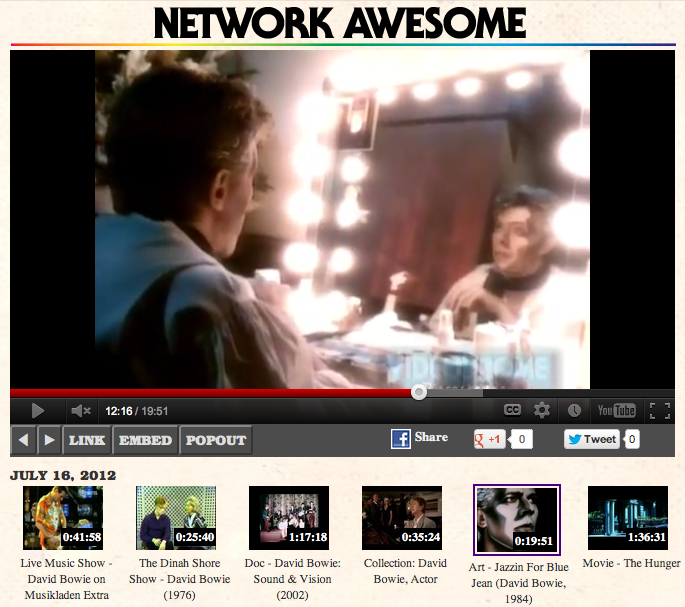 I don’t post much (any?) classical music, but I’m a sucker for the cello. So here are two cellists, each adopting an innovative approach to their instrument, and each with a link to Berlin.

First up, Charles Sammons, who I’ve seen busking in California Breakfast Slam and Schönleinstrasse U-Bahn station. The Virginia/Washington DC native is in town, composing for film and theatre – including this production of Moby Dick (woot!) – and rocking his rhythmic brand of avant-garde classical.

And now, Canadian and former member of Antony and the Johnsons member Julia Kent. Real tenuous Berlin link this, but this looped cello track is called “Tempelhof”. Enjoy…

Mexican food in Berlin is, depending on who you ask, either substandard or just good enough. While it’s certainly better than the city’s attempts at other international cuisine (especially the curry), we hear complaints that even Berlin’s best isn’t that authentic. That’s why we were so excited to be invited to Krauted Haus supper club’s special ¡Ay, Chihuahua! event. While I would have been happy with the best (or biggest!) burrito I’d ever eaten in my life, the other gourmands in attendance asked a little more from the multi-course neo-Mexican tasting menu. Conversation around the table in the hosts’ cute apartment touched on other restaurants and supper clubs in Berlin, and expectations for this one were running high. The menu and margarita in front of us seemed to signal promise. Fortunately, the food didn’t disappoint. While the dishes that opened and closed the meal – pink gazpacho of watermelon, cucumber and almond, and pineapple custard – proved to be acquired tastes, the meaty mains at its heart were triumphs. My taste buds were pricked by the drunken grilled shrimp with beans, greens and abodo sauce, and Zo’s pigged out on the pork belly: Asado de Cochinillo served with delectable corn crepes and grilled banana. Chilli sauce was brought to the table for heat freaks like myself, while the dark chocolate vodka chillis (genius!) and salsa that accompanied the nachos already came with plenty of kick. So ¡Ay, Chihuahua! was pretty ayiyawesome. If we had to criticise anything, it’s that we didn’t see enough of the Krauted Haus team itself. We “know” Samantha and Sophie from Twitter and share mutual friends, so it would have been great to get them out of the kitchen for a chat. Our favourite supper clubs have been the ones where the hosts have been around to explain – and in some cases, enjoy – the food, and even though Sophie’s parents were entertaining, they were no substitute! I guess we’ll just have to come on another night to get to know the girls – and their great food – better ???? Follow them on Facebook for more details.