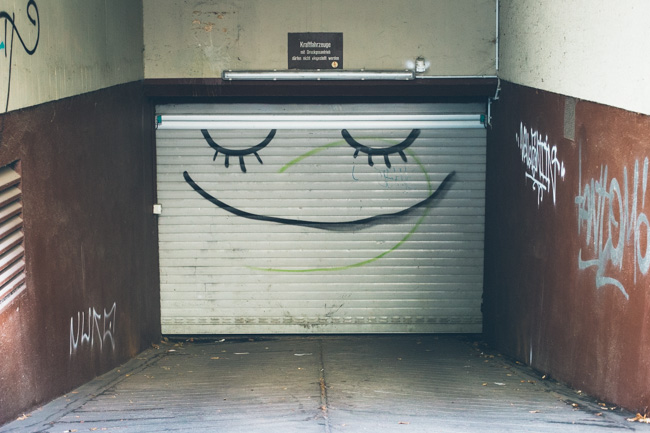 This was going to be a post about how shitty customer service is in Germany. We’ve all heard about, or experienced, things like: surly bar service, valuable deliveries that dropped off the grid without a trace, unanswered emails, ignored tweets, blah blah blah…

…it all started, as it so often does, with an undelivered package. The bourgeois tosspots that we are, we subscribe to a certain service that delivers recipes and their ingredients to your door – at least, that’s how it’s supposed to work. This time, they promised to deliver during certain hours, and didn’t. When I emailed their support team, I was told that the delivery had been confirmed for a different time slot, and I should have been waiting for it. I asked them to check the confirmation message I’d originally forwarded them for proof to the contrary, and the email chain went dead.

I gave them a few days before following up via email. Where was my response? Where was my refund? And the answer to the other question I’d asked? Hearing nothing back, I took to Twitter. After a few unanswered tweets, I started to @-mention their UK and US teams (a move I learned from the indomitable @Fauxlie_). Sure enough, the Brits intervened, suggesting I call the German team. In no mood to ease the situation, I sent a shitty tweet asking why I shouldn’t expect to have my problem resolved via the email support channel they do in fact offer. (I’ve since apologised for that – they were just trying to help.)

And then, after a long, frustrated rant to Zoë, it occurred to me: all of my interactions with this company had been in English. Sure, I apologised at first for my crappy German (auf Deutsch) before asking that we switch to my native language. But I might have been even more annoyed if the response had come back in German. And, despite my natural aversion to actually speaking to people, the real thing stopping me picking up the phone was the knowledge that we’d quickly reach the limits of my second language, and I’d have to suck it up and ask, “können wir Englisch sprechen?”

This is bonkers. If I was in England, and didn’t speak any English, there would be a 0.001% chance that someone would be willing or able to speak to me in my native language. Yet here, in the German capital, I get by perfectly well with not-that-great German skills. I’ve rented an apartment, registered as a resident, got a dog, started a blog and a business, paid my taxes, and yes, even had my groceries delivered – all by subjecting people to my crappy German, persuading or paying people to speak echtes Deutsch on my behalf, or just expecting everything to be done in English.

This shit doesn’t fly in other places, or in other languages. I work for a company whose customer happiness (oh yes) rating always tops 90%, and we support millions of people all over the world almost entirely in English. I should remember that for a German speaker to be writing or speaking in English, even with the help of Google Translate, they’re going the extra mile. I’m not meeting them halfway, not remotely. If my email or tweet is dropped, it’s probably not because the person the other end is terrible at their job, but because my query is automatically the trickiest one in their queue.

But I don’t remember that. We don’t remember that. As visitors to this country, no matter how permanent – hell, as owners of businesses here – we get used to a certain amount of English fluency from everyone we interact with. A couple of years ago we published a guest post that I don’t fully agree with, in response to an Exberliner attack on Melbourne Canteen for having (at the time) menus in English only. While the original article was gratingly holier-than-thou, I find it hard to stand behind our writer’s argument that English is more useful to Germans than German is to English speakers. Presumably, that’s the same stance of another business outed recently as having no Deutsch menus, despite proclaiming themselves to be “100% Neukölln”. It seems that expats’ aversion to German is becoming institutionalised.

Yes, as Berlin becomes more and more international, with new arrivals sharing English more than any other language, it’s possible to envision a day when our common tongue is the city’s second semi-official language, as Spanish is in California. But for now, we’re in Germany and we should (try to) speak German. Anyone who is willing to switch to English with you should be treated like the angel they are – after all, they are part of the reason why your dumb ass is able to remain here.

Remember when you moved here, and you were amazed by how perfect everyone’s English is, and how readily they resort to using it? Hold onto that feeling, cherish it. And repeat after me: when someone is using their second language in a country where you should be speaking their mother tongue, they’re incapable of bad customer service. Just by communicating with you on your terms, they’ve already gone the extra mile.