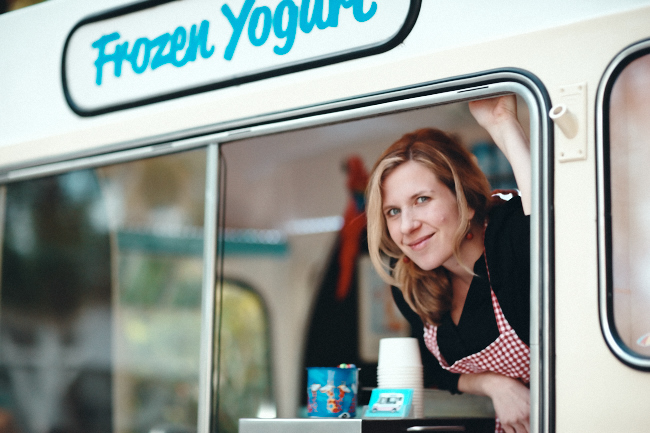 You’ve probably seen Eva Langhorst driving around Berlin. After all, her pink and white sixties-style Mr. Whippy ice cream truck is hard to miss. “Freshly made just for you,” it declares in bright blue lettering, and it’s true. Every morning, Eva gathers fresh ingredients – milk, yogurt, fruit – from the local markets in Berlin, and spends the day driving around in her truck, a realisation of a childhood fantasy and an enduring love of ice cream. Her dedication to her craft is made all the more impressive, I find out, because right now Eva is pregnant with a baby girl. When I ask if she’s going to continue running the truck when the baby comes, she smiles. “My parents want to build a custom baby seat for the truck,” she laughs, “So, I can take her with me! We’ll be fine!”

Eva started her business in 2012, and since then, she and her Mr. Whippy truck have travelled all over Germany, selling homemade frozen yogurt. “There’s a lot of risk that you take with a job like this. It’s hard,” she continues, “And when you have a baby, it’s harder. But I don’t really see it as a job. It’s just fun.” It’s no wonder, then, that the end result is so sweet. 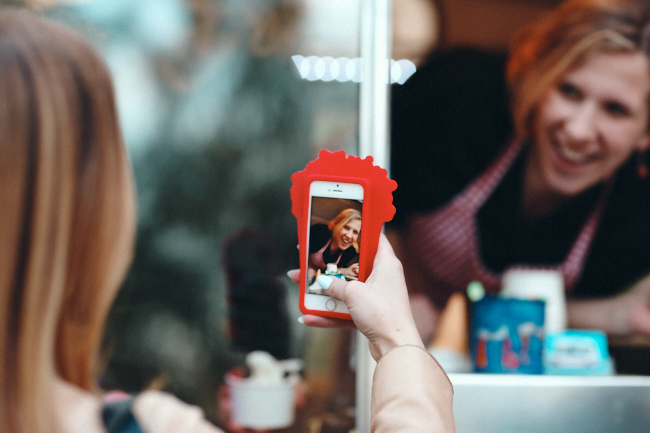 In his book The Feast of Love, Charles Baxter wrote, “Forget art. Put your trust in ice cream.”

(Laughs) I definitely agree. I eat ice cream every day! No lie, I can’t get enough of it! I spend all winter actually looking forward to putting on the ice cream machine again! Even if I work all day, my boyfriend and I come home very late at night, we park the car, and we walk to the kiosk to buy an ice cream! (Laughs)

Have you always been this passionate about ice cream?

I was actually quite into ice cream even from childhood! (Laughs) I’ve loved frozen yogurt since I was a girl – that’s where it all started. My mom told me that when I was growing up, I wanted to become an ice cream seller! So there must be something about it! (Laughs)

Do you think that kind of nostalgia plays a certain role in making Mr. Whippy so popular here in Berlin?

Yeah, I think it definitely plays a role! For me, I’ve searched for it for frozen yogurt for years because when I was ten, I tasted it for the first time and I just loved it. With Mr. Whippy, it’s not only the product, it’s also the van that attracts people. Everyone recognises it, it’s like a giant toy! Everyone remembers these kinds of trucks from their childhood, so of course it generates those lovely nostalgic feelings in some way. 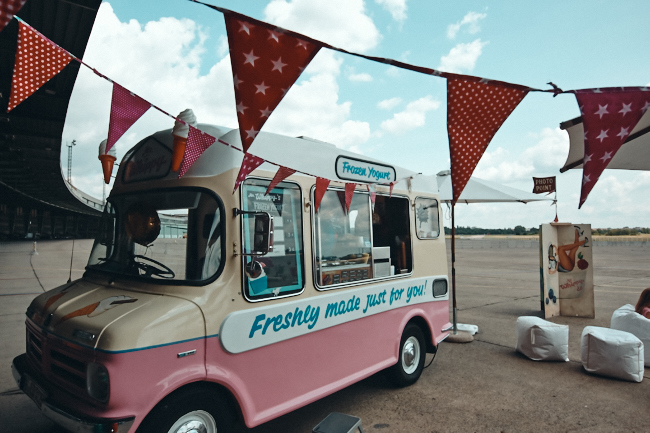 Can food, ice cream especially, ever really be as good as the memories or feelings associated with it?

In our case… Yes! My mother makes the best elderflower sauce. It’s one of the syrups that we stock in the truck. Even though, like you said, the associations are a strong influence… I think it really is that good!

Has Mr. Whippy always been a part of your life? Do you have a special connection to the brand?

I actually didn’t know the Mr Whippy trucks because we didn’t have them in Germany. I first wanted to start selling frozen yogurt and only later came the idea of the truck. In 2012, we found the Mr. Whippy truck and imported it from England. It was already a Mr Whippy truck, but I thought, “I can’t change the name!” (Laughs) There was no copyright in Germany, so I just kept it. Then I started to restore the car basically from the inside…

I read that your father helped you re-design the truck.

Right! My dad is really good with cars, luckily. He used to be a racecar driver when he was young! So he’s my helping hand. Without him, it would have been difficult, with all these technical tasks and mechanical problems. It took us four months to restore the truck, and get it decorated. On the side, I work as an illustrator, so that came in handy when we were designing the inside and the signs. I like to work really creatively… I kept all these elements from the sixties and added my own twist, so that was a great project! 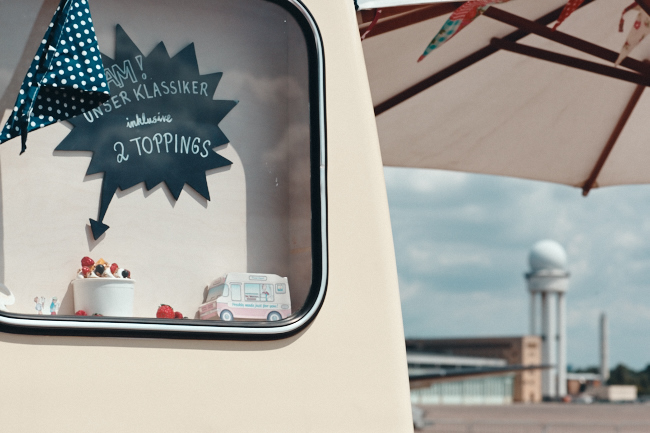 It sounds like a family affair. You said your mom makes the sauces, right?

Yes! She’s really sweet. She lives in the countryside and she has this whole garden with all the berries and the elderflowers. So, she does the bases for the sauces for me, and then we have fresh fruits by season as well. I wouldn’t know what to do without my family’s help. My mom helps a lot. And she even comes sometimes to help me with the selling! My dad and I have gone on some trips together with Mr. Whippy. (Laughs) He drives the truck! My cousin helps me as well – she lives in Berlin, too.

Is that homegrown aspect of Mr. Whippy very important to you?

Very important. It makes it so that you can put a lot of love in it. Everyone helps. That’s another reason why I want to keep the company small. It’s important that I’m always present with the truck, I want to keep it close to my heart. We also try to keep the business local… Like I said, we use seasonal fruits from local vendors, and everything is fresh.

That’s what makes Mr. Whippy so different to the kind of ice cream trucks I know from my childhood in Canada, which seemed like a franchise. Everything was mass-produced.

Yeah, actually that happened also a little bit with the Mr. Whippy company itself. It goes back to what we were talking about before with the childhood memories. Sometimes I actually have problems with the name for people who know it from England and associate it with that kind of food franchise. But different people, different connections.

What has the reaction been like from Berliners when they see you driving around?

There’s the English crowd that really knows Mr. Whippy! We used to have ice cream trucks driving around here in Germany when I was a kid, but more in the countryside, so I don’t think Berliners know it that much. They didn’t have that this ice cream culture of the van driving around. For the most part, it’s not the brand that’s the attraction, it’s the look of the big pink truck!

Let’s talk about the product, which is so delicious. What can you tell me about the recipe, or is that top secret?

(Laughs) The secret is actually to keep it simple. It’s important to find a good quality for the base. There are some bases that are just mixes that you stir in with water, and that’s… Well, not so nice. I use fresh yogurt and milk and a bit of lemon, blended with a sugar mix made by another Berliner. He has a frozen yogurt shop and he works as a food developer, studying some kind of gastronomic chemistry. We buy the milk from a local farm as well. So the produce is all from Berlin, and we all work together. We just try to keep it simple and use fresh products. 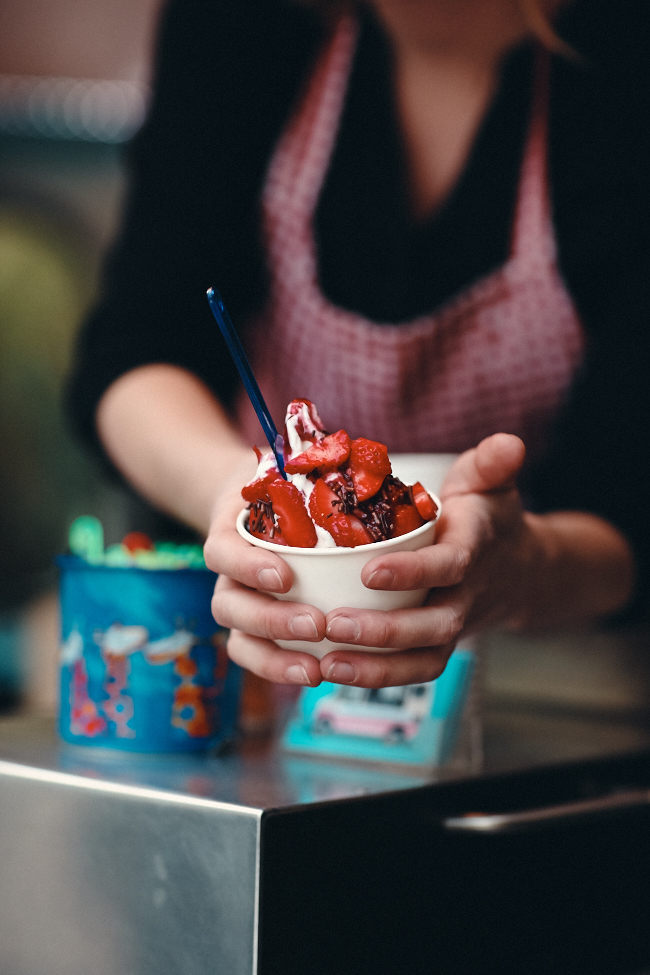 As for keeping it simple, I imagine it’s been quite a task getting a food truck business up and running in Berlin, the capital of making things complicated.

(Laughs) There’s a lot of rules in Berlin! There are infinite rules about where you can park and sell. When I first started, I thought I could park anywhere in the street, but it turns out it’s very difficult. Of course, the city makes it kind of impossible to park and stay and sell just anywhere. You are bound to the festival places and food markets. It’s also an electricity problem – the machine needs electricity to run, so it’s hard to be self-sufficient. There’s also the problem that because you’re on the road, things can break down! Luckily this has only happened once, but I got towed to the Bread and Butter trade show because I just had to make it there! (Laughs) It’s the same with any job though – you can never foresee what’s going to happen.

Running a truck does have its perks, though, I’m sure.

Of course. This gives me freedom! I can park the car when I don’t want to work anymore. And it waits! I can drive around if I’m not selling well. We’ve driven to Hamburg, Munich, all over Germany on these little adventures in the truck. I don’t think we’d have the same experience if we were rooted in Berlin with a shop or a cafe.

Food trucks are becoming more and more of a trend these days, especially here in Berlin.

Yeah! Definitely. It’s getting really bad for that! When we started, I was one of the first trucks driving around. I got lucky – I was there before the big competition really started. Currently, there’s not really any other frozen yogurt trucks though, so there’s no direct competition for me. There are a lot of people who do ice cream, but the ones that I’ve met, I’ve become friends with. We give each other jobs. It’s a very friendly environment.

I was going to ask… Are you guys out there racing around in your trucks to beat the other vendors to the best spots?

(Laughs) Fortunately, this doesn’t happen, no. We support each other! Sometimes we even park next to each other! You have to live with it.

Do you ever worry that the food truck trend is going to go out of style?

I’m not so scared! I know that actually a lot of frozen yogurt and ice cream shops around Berlin already had to close, and maybe that’s a little bit of a pressure but I don’t think it will ever really go out of style. I think if you have the right product, it doesn’t really matter so much what’s trendy. You create the whole environment. And people will always eat ice cream!

It’s my number one weakness.

I read an article that Germans are the number two highest consumers of ice cream in the world. So why should I worry?! (Laughs) You can have ten burgers but there’s always room for ice cream. 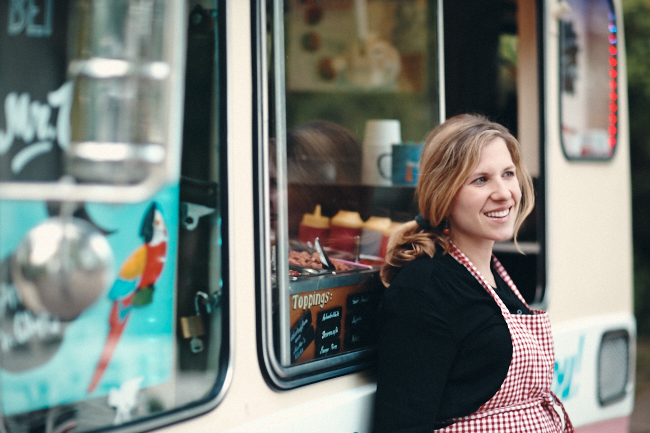 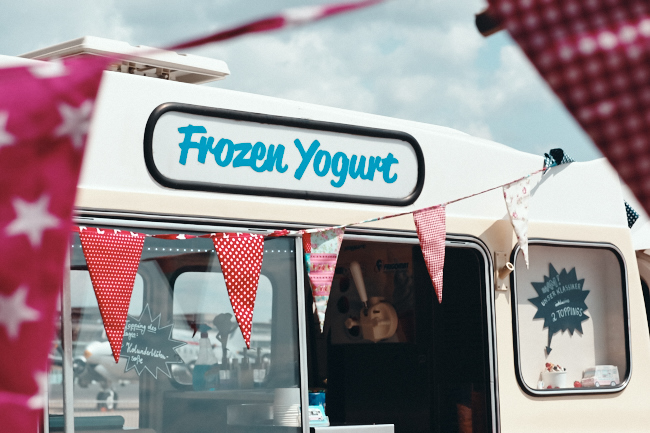 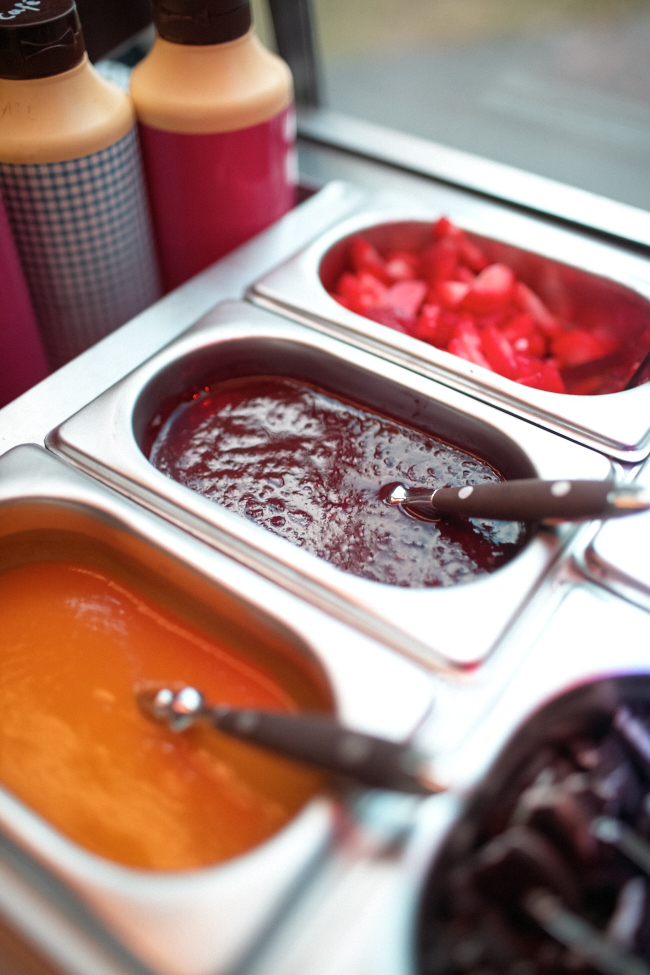 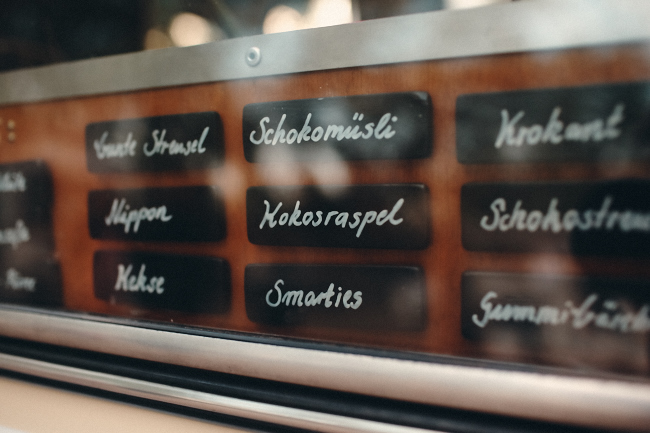 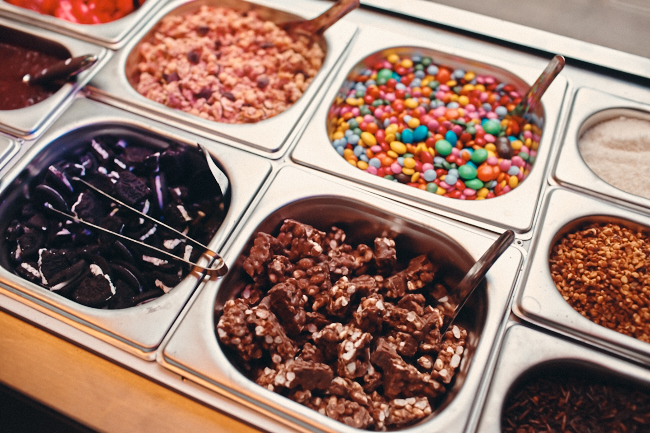 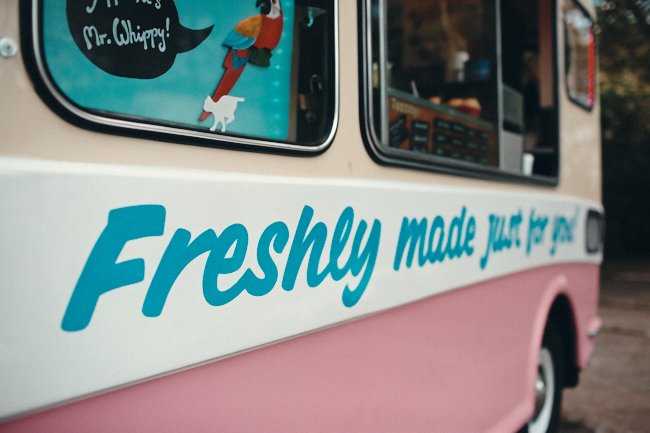 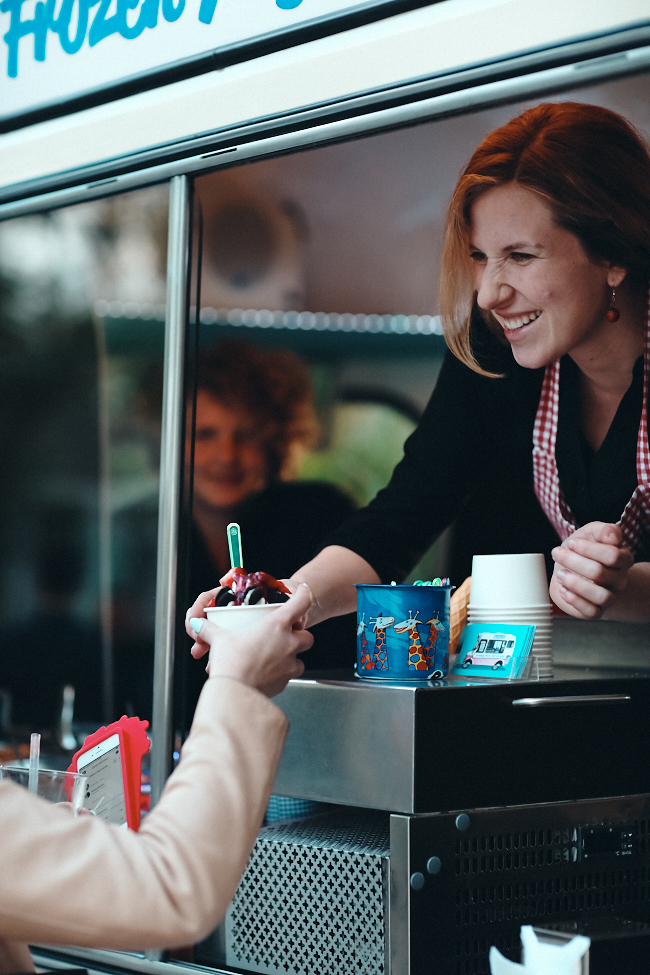