A week before our last visit to Berghain, Zoë’s parents read something that gave them cause for concern. According to a hysterical article in The Sunday Times, the UK’s most popular weekly newspaper, inside the (in)famous Berlin club the “smell of sex is overpowering”. I’ve never smelt anything like that inside the club, but I did get a whiff of something when I opened the copy of the Times my in-laws mailed to us. Bullshit. 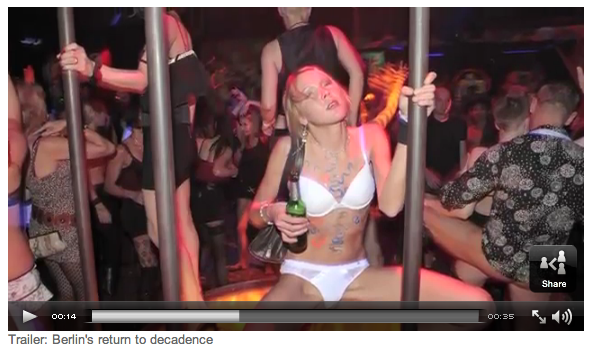 I can’t link to the article, because the News International dinosaurs have hidden it behind a paywall – which is either unfortunate or lucky for you, depending on how much you like to be angered by sensationalism and lies. (As you’re about to find out, I love it.) You can however, see the “trailer” for the article (click through on the image above), and read a pretty decisive dismantling of it over on skruff.com. Quoted there, former Bar 25 resident DJ Beaner is the voice of reason:

it’s just the basic London journalism. You know, it’s using vague second hand non-facts to prove a story that you set out to write already… That kind of stuff [writer Christopher Goodwin] described does exist in a few places in Berlin though I honestly think Berlin was wilder and more hedonistic a few years back.

The point is not that sex and drugs aren’t common features of certain Berlin nightspots, just that they aren’t everywhere, in every club – as Goodwin suggests. His assertion that “the Berlin scene is driven by such blatant sexual licentiousness and ubiquitous drug-taking that it would make the denizens of the decadent Weimar clubs of 1920s Berlin blush in their velvet coffins”, is based 75% on a visit to the KitKatKlub, and 20% on a trip to Berghain. If you go to a fetish club, you are going to see sex, and if you go to a gay club, you are going to see gay stuff.

To “report” such goings-on so pornographically (“a model-beautiful blonde woman in her early twenties is being taken from behind by an athletic young guy as she orally gratifies another man while stimulating a third with her hand”) and to imply that they take place in every Berlin club is far more irresponsible than any of the participants’ actions. Labelling an article “not suitable for children” is the worst kind of tabloid journalism, as is the use of homophobic and demonising language (“minces”, “as satanic as the club he owns”) and the outrageous, downright racist suggestion that “many fear [Berlin] will degenerate into a crisis as serious as that which gave rise to Nazism.”

Count yourself lucky you can’t read this shit. But be prepared for questions from concerned relatives back home who have been conned into believing that everyone in Berlin is fucking and drugging themselves silly, out in the open. Just be straight with them: drug-taking is more open here, but probably no more prevalent than clubs in London or anywhere else; the sex is consensual and takes place in designated fetish clubs (which also exist everywhere); and you’ve seen far fewer casualties of substance abuse or violence here than anywhere else you’ve ever lived. Stick that in your bigoted, fear-mongering pipe and smoke it, Sunday Times. Just been for a Sunday stroll… ON the Landwehrkanal! It’s frozen solid, so bring your ice skates!

Sexpat and the City: Cause when it comes to love I stay sharp, cool and collected… “LARGE SCREAM! It’s the first year in ages that I’ve been single; single and in Berlin! Enter slightly agitated emoticon stage left. This is the one day of the year dedicated to that crazy little thing called Love (and to emptying your wallet). But worry not – for I am about to advise a number of people I have never met how to survive Valentine’s Day based on nothing more than common sense and crushing narcissism.

In a relationship? Either you leak currency all over your loved ones or face potentially fatal levels of passive-aggressive psychological warfare. “But wait!”, you exclaim. “I just handed all my money to some fat, pissed prick in a red suit not more than a month ago!” My advice, mate, is never argue with winged men-children wielding a bow and arrow. Also, always check if anyone nearby can also see said flying Roman deity before replying… 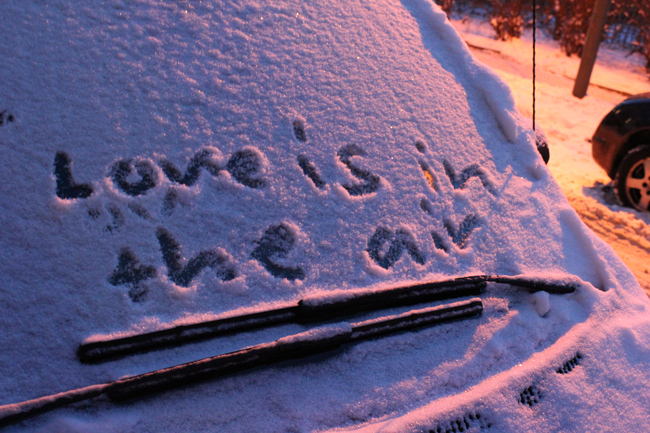 Currently single or “it’s complicated” (not a real thing)? Things shouldn’t appear quite as bleak as they probably really are, because – thank Eros – Berlin clearly doesn’t give two flying heart-shaped shits about February 14th! Not just because it’s a massive waste of effort and money but it’s also quintessentially un-Berlin. Case in point: not one single person in the German office I occasionally pretend to work in is celebrating or even thinking about V-Day. Meanwhile, walk down any high street in the UK and it suddenly becomes imperative that you spend at least 100 English dollars on reminding your loved ones that you remembered that you should remind them to remember that you love them very very much.

The closest I’ve come to witnessing any kind of romance in Berlin is on a small patch of grass in Tiergarten frequented by naked men. Don’t believe me? How about a hot date with a sexy doner in Hermannplatz watching homeless people pass out in portable toilets with needles sticking out of their arms? This city was built on Sex & Drugs, not Ro & Mance.

So, single Berliners, what are we going to do while the balls and chains of the city loudly exchange mouth DNA on various mode of transport? As in any capital city, the lonely hoards are paying more rent and taxes and not getting laid frequently enough – they must be entertained! For instance, you could go sit in a bar, get drunk, take some rotter home and “fuck the pain away”. Or why not paint your bathroom windows black, kill the lights, blindfold yourself in a cold tub full of ice and wait until morning comes? You’ll be saving countless Euro Pounds by not plying someone you’ve already seen naked 7,822 times before with toxic amounts of alcohol just to see if their legs will bend an extra two inches further behind their head.

How about some Tuesday group ping pong action at Dr.Pong in Prenzlauer Berg or some sociable spitting off the Warschauer Bridge? Whatever you do, let’s not forget that the real point of Valentine’s is proclaiming your love to an unsuspecting crush who may not know – or even want to. Why not throw caution to the Windgeschwindigkeit and mail that Fraulein what makes your heart flutter a nice, big origami penis? She’ll know who it’s from.

Me, I’ll be taking the night off from trawling the Berlin streets for vagina and sitting in bed watching Say Anything – which is ten times cheaper and 10 million times more romantic than getting drunk and pulling some rotter just to “fuck the pain away”.

Failing that, do you think it will be too cold for a late night trip to Tiergarten?”