Hardcore heroes Black Flag at the height of their powers, live at SO36 in 1983. Intense.

An Interview With Henry Rollins

On January 31st, Henry Rollins hits Berlin. Hardcore punk’s hardest-working road dog will deliver an uncompromising and candid spoken performance that pulls no punches. A true renaissance man, Henry also works as a radio host and runs music and book label 2.13.61, which recently published Occupants, a collection of his own photography and writing about conflicted parts of the world. We used that book as a jumping off point for a brief email exchange about Berlin, travel and music. 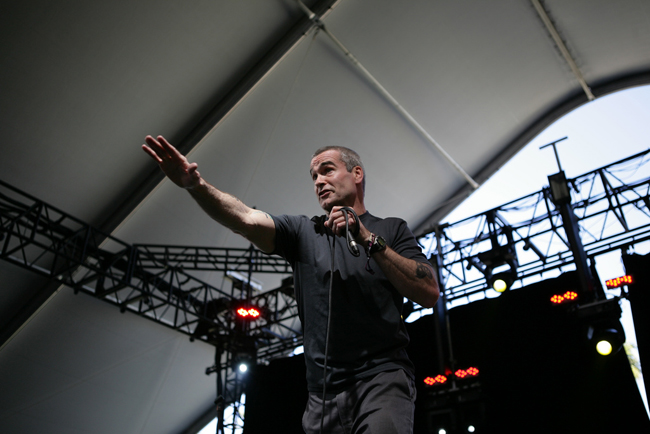 Occupants documents conflicted parts of the world. When you visited the divided city of Berlin with Black Flag, what were your thoughts?
I didn’t understand how anyone would build a wall around a city to keep people in or out. It seemed to me that the people running the show were very immature and in need of a change in direction. Every time I was there, I would walk along the wall, in disbelief that it was still there. I was in Switzerland when it came down. I think I was in Berlin a few days before.

You’ve been to Berlin many times since – have you seen changes in the city?
As far as I can see, it’s just another cool looking German city now. When the wall was up, there was a romance to it. However, seeing what people had to live through, I would go without the romantic element for the emancipation of people. It is to me, a very beautiful city.

Will you have time to explore (and photograph) the city when you visit, or is it a case of in-perform-out?
On tour, I am pretty much all about the show. There won’t be any time to look around, I’m afraid.

In Black Coffee Blues you wrote that traveling sometimes made you feel like a “perfect stranger, like I was born to be forever isolated from them”. That’s something we expats understand. Does that ever change? Over the years, have your travels made you feel more connected with the world and its inhabitants?
Not really. I travel alone all over the world and feel OK in it but never really connected with it. I like people very much but have never felt all that close to them. I like to be in front of them, serving them but I don’t really know many.

In a column linked to your awesome KCRW radio show, you recently named Bowie’s Berlin Trilogy and Lou Reed’s Berlin as the perfect soundtracks to the “cooling off period” of fall. When you visit us, we’ll be well into our brutal winter – what should we Berliners be listening to then?
Nico. Listening to Nico when in Germany is for me, one of those geeked-out rituals that I always try to do. The Burning The Ice album of Die Haut featuring Nick Cave is also a good one. Kluster is always good in cold weather.

For people that haven’t heard/seen your spoken word before, what should they expect?
I am going to be onstage talking about where I have been, what I have seen and how I feel about all of that. That’s basically what I do.

I grew up listening to The Boxed Life over and over, and I’ve just been catching up with your recent spoken word releases. There seems to be a shift in focus from the personal to the political – does this outward-looking viewpoint come with age?
I think it’s part of traveling as I do and being older, I am less interested in myself and more interested in everything else.