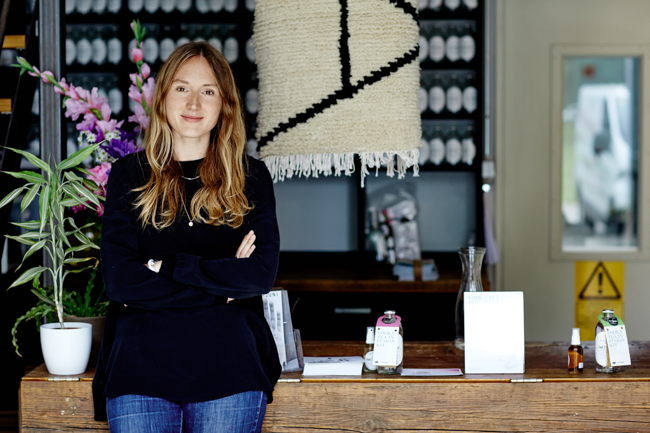 “Is it too early to start drinking?” I ask upon arrival at the Our/Berlin vodka distillery in Treptow. Luckily, Pauline Hoch, one-half of Paul Sanders, the marketing agency at the helm of Our/Berlin, doesn’t think so. Laughing, she fixes me a drink: their new tea-infused vodka, a splash of tonic, ice and a tendril of orange peel. “We were on an inspirational weekend with the team at a house in the countryside when the homeowner suggested we infuse the vodka with tea,” Pauline explains, “It was genius. Then a local tea company called Paper & Tea got in touch with us unexpectedly, and we were able to collaborate. It was an effortless partnership.” Such seems to be the way with Our/Berlin vodka: they emphasise not only a sense of local camaraderie and community, but a simple, homegrown aesthetic that is the very essence of their brand.

Our/Vodka got its start in Stockholm in 2013 when a group working with Pernod Ricard came up with the idea for a global brand with local roots. After looking in the nightclub and gastronomy industry in Berlin, the team met with the Paul Sanders Agency (run by Pauline and her partner Jon Sanders). The first of many effortless partnerships, I guess. With Berlin as its flagship city, the brand has since taken on Detroit, Amsterdam, London, and Seattle as its adoptive homes. Here, the brand has evolved from more than just a simple vodka manufacturer: the team hosts infusion workshops, dinner parties, cooking classes, art exhibitions, and happy hours. After a quick tour of the distillery’s facilities, I sat down with Pauline to talk simplicity, science, space, and of course, vodka. 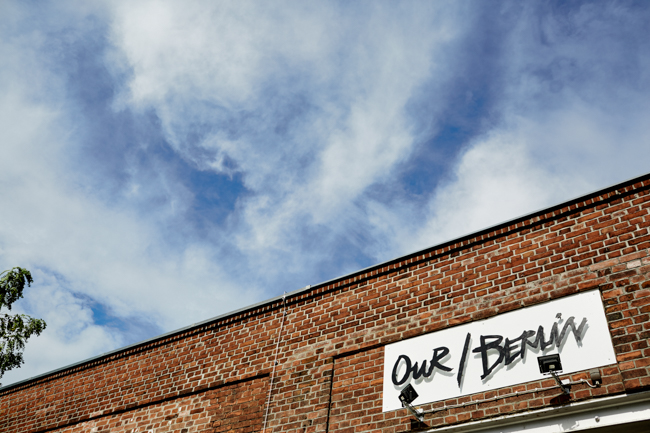 With wine, there is a very distinct process for evaluating and tasting. Is there a proper way to drink vodka?

Of course the Russians would say you have to drink a lot. (Laughs) Especially when you eat! I think our cultural standards are a little different here in Germany. We try to tell our customers that they should try the vodka pure and at room temperature so they can really appreciate the quality. Of course, it’s also okay to just mix it with a soft drink, Mineralwasser, or tonic. You don’t have to be an experienced bartender to make a nice drink!

And how do you drink it?

In summer, I like a strawberry margarita with vodka. But in the winter, we collaborate with Berliner Winter to make a kind of hot vodka drink with apple cider. It’s similar to a grog, and very delicious. I also really like it after dinner as a digestif, kind of like a grappa… But like I said, drinking it pure is the best way to appreciate it.

The taste is very subtle, which I think is rare for vodka.

Exactly — it’s very mild. I think vodka has a bad reputation because people think of the taste in a certain way…. Our/Vodka is not overpowering, there’s no real “flavour,” so to speak. Some people say it’s a bit lavender-ish, some say there’s a hint of lemon, but there’s nothing that we add in. We use German-local ingredients and purified Berlin Leitungswasser, so the recipe is really as simple as the concept itself. It’s funny because I have a lot of girlfriends that aren’t into drinking vodka, but they drink this vodka because it’s so smooth. 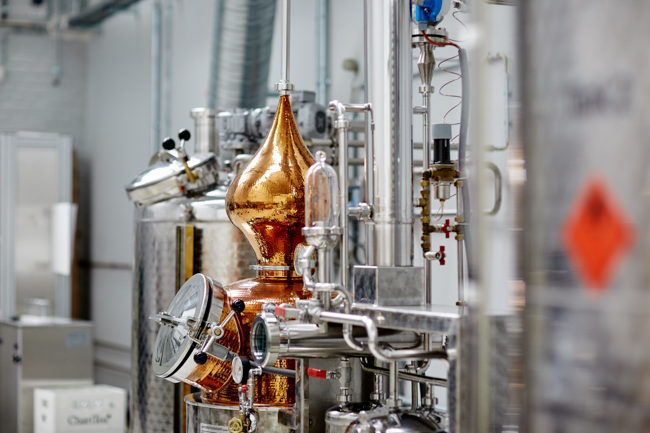 Can you explain the science behind the distilling process? What exactly happens behind closed doors here?

I’ll give you the simplified version: here in the factory, we distill the aromatic fraction that gives the flavour to Our/Vodka. This is then blended together with wheat-based ethanol, which we import from Münster, and purified Leitungswasser. When we were initially sourcing our ethanol, we found that the quality here in Berlin and Brandenburg was too poor, so we ended up importing from Münster, which is working very well for us.

But otherwise, the Our/Vodka aesthetic is very local.

Definitely. We love the sense of community here in Berlin, but we’re also expanding the “global” part of the brand as well. We were the testers, the guinea pigs, the trial. And now, they opened up Our/Detroit and Our/Seattle, and Our/Amsterdam will be opening in October. The global aspect is coming more and more together, which is super nice because we were always feeling a little alone over here — we were the first European city for Our/Vodka, so we’re very much looking forward to having our sibling opening up in Europe. 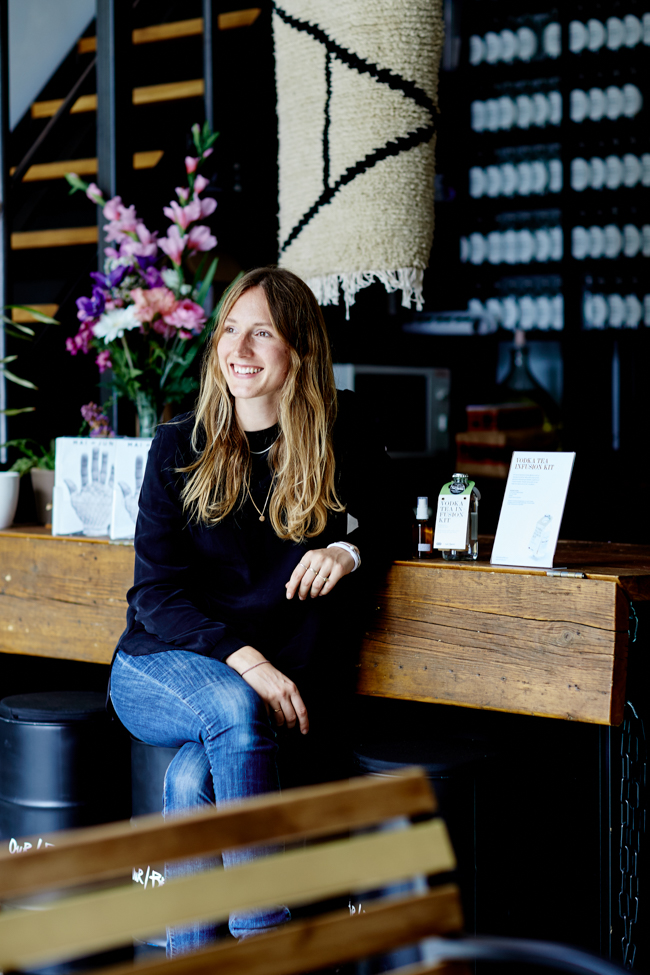 Is there a strong connection between all of the headquarters, or do you operate exclusively?

We definitely have a strong exchange with the teams all over the world. We have an internal communication tool, we talk about everything, we swap ideas, we review new materials together… We’ve actually become close friends with the team in Detroit. We really got to know them well, we’ve spent holidays over there and they showed us around the city!

I love Detroit so much. There’s such a huge sense of community over there… It reminds me a lot of Berlin, actually.

I think so too! There’s a lot of common ground between Detroit and Berlin. The decision to open up there was a huge one. People were like, “What?! Why Detroit?!” It seemed crazy that we would set up there because the economy is so bad but it’s working out so well. If you are actually the one to start something and develop it, you inspire the community and you can create something amazing. 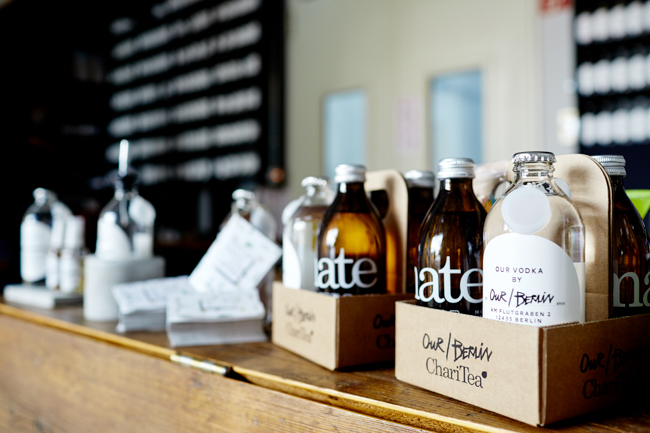 Why do you think Berlin was chosen to be the flagship city for Our/Vodka?

Berlin was the perfect choice for the first city because it’s still so young. It’s vibrant. We also have such a big nightclub and bar scene here…. The city is so attractive for a lot of people! This is where trends are set! I think there’s a preconception that everything that comes out of Berlin is cool. (Laughs)

Our/Vodka has set up shop in Berlin, Detroit, Seattle, London, Amsterdam… What’s the common denominator in all these cities?

I’ve asked the same question! It’s most important that the city is young in terms of its established markets… For example, they didn’t want to go to Portland: they went to Seattle instead. That’s not so obvious a choice but we did that because in Portland, there’s already a strong local community with a local brewery and distillery. It’s easier to cultivate this sense of community when you start it from the ground up. People are very open to new products in these cities — it’s very inspiring.

And what made you decide to open the distillery here in Treptow?

It was admittedly very hard to find the right space. It’s especially hard within the confines of the city because there’s a lot of building code requirements… But we found this place and we love it. It’s still in the city but it’s kind of isolated as well. We have a very vibrant surrounding here, there’s Club der Visionäre and the Badeschiff and White Trash and Arena Club all just around the corner. We’re very lucky. 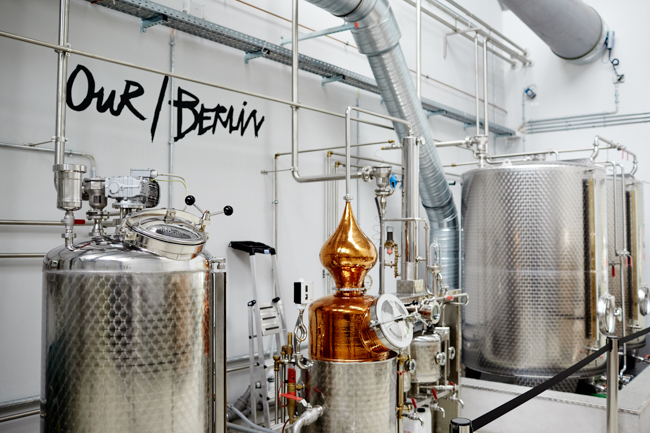 You mentioned these building code requirements. What kind of restrictions are there?

Have you ever seen a distillery explode? (Laughs) It basically just leaves a big hole in the ground. If the distillery explodes here, the entire area would be wiped out. It would look like Mars. (Laughs) So, we have to be very careful. In New York, they were fighting so hard to get the proper permits, they wanted to open the distillery actually within Manhattan — which they succeeded at, by the way; Our/New York will be the first distillery in Manhattan since prohibition times! So, yes, we’re very happy here, and lucky to be here.

I read that you guys brought on an engineer to customise the space as well.

Exactly. And there were a lot of rules. Of course — we’re in Germany! As it was the first distillery for the Our/Vodka project, it has to be made very properly. The laws are very strict! (Laughs) We had to keep in mind that we needed an area to host events, but also a working office space, and a storage space for the dry goods that we use for packaging and bottling and labels and that kind of thing. The best part is this nice roll gate that you can pull up in the summertime, there’s a nice breeze and so much natural light. 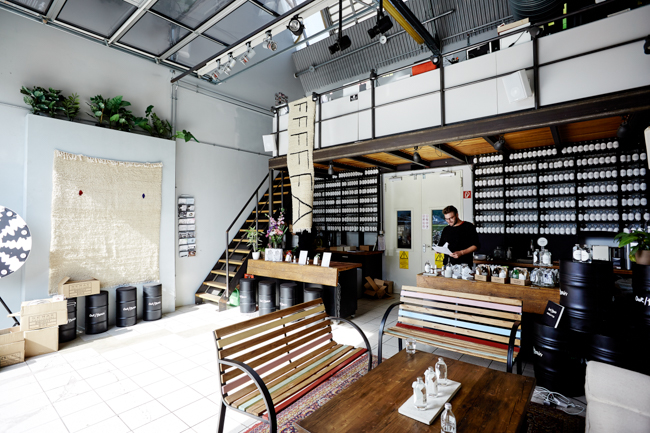 That’s so nice because, for me, space really affects my creativity.

Absolutely. When we have the doors wide open in the summer, there’s no boundary between customers, visitors, and us. It also helps creativity flow, helps us find new ideas… Because it’s so open, you can move around, you can go outside when you get sick of sitting in front of the computer… This area is so full of creative people, too. We spend almost more time chatting with our amazing neighbours than we do inside working! (Laughs)

It definitely doesn’t feel like your typical office here.

It was important for us to have a space where people and also our team feel comfortable. It’s a vodka distillery, but it shouldn’t have the feeling of an office. We want to be very open. We want a space where people feel they can just drop by and have a drink. We want people to be comfortable here. That’s what we’re trying to achieve. Just like we have the name on the bottle, we really want to make this Our Berlin. 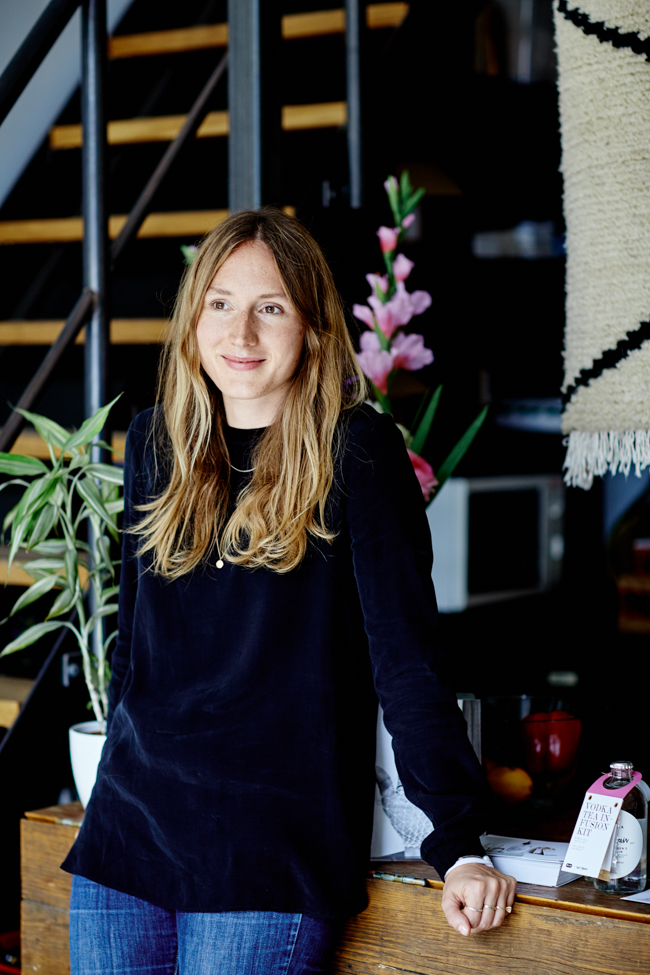 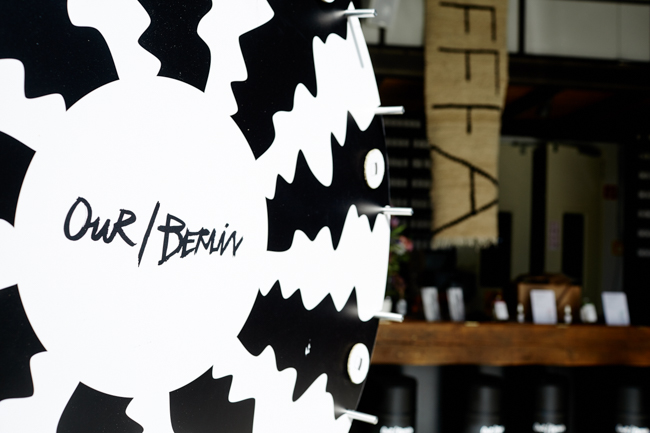 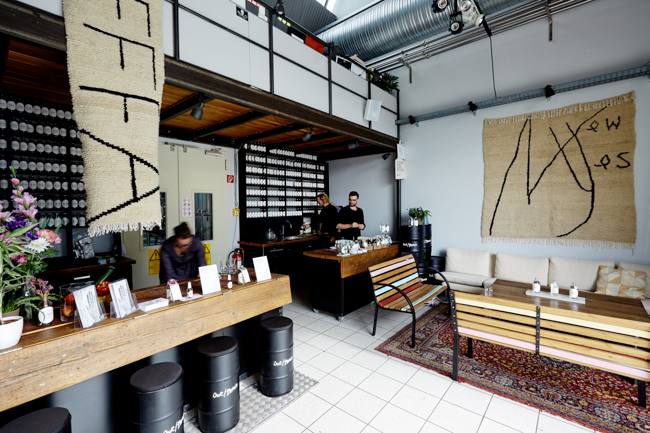 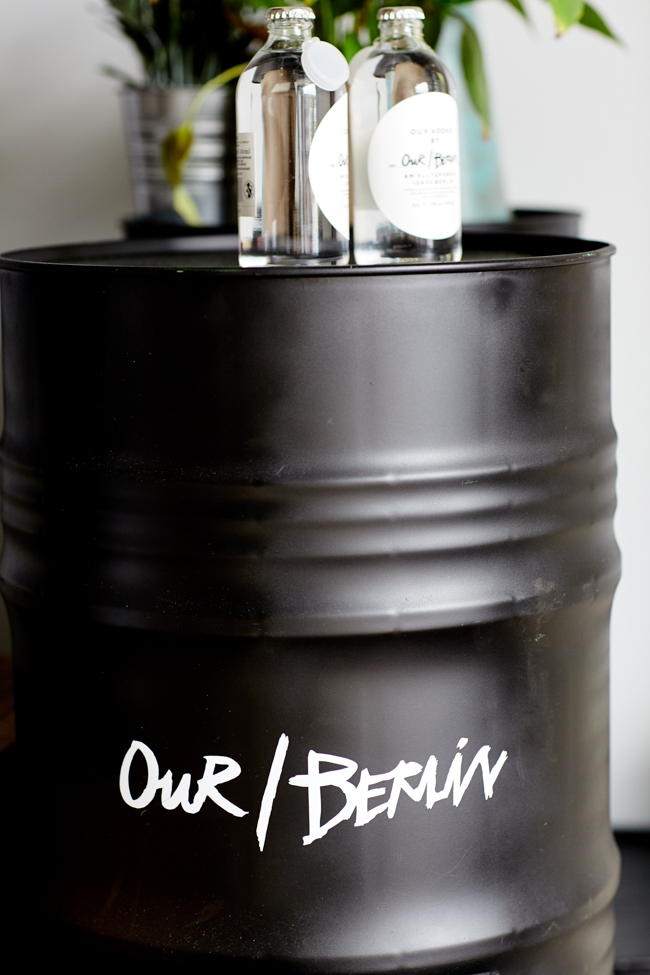 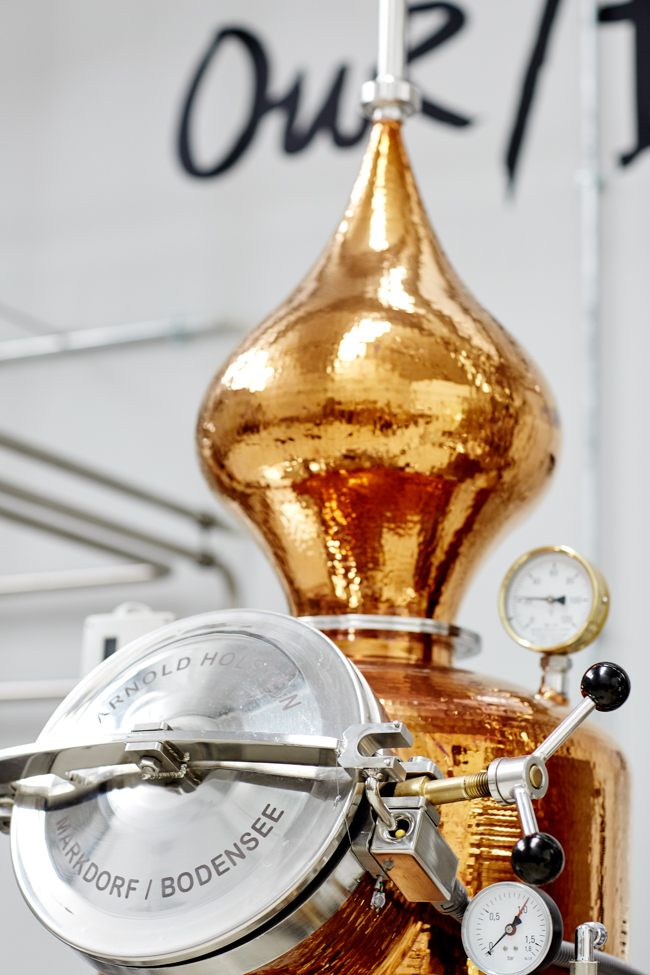 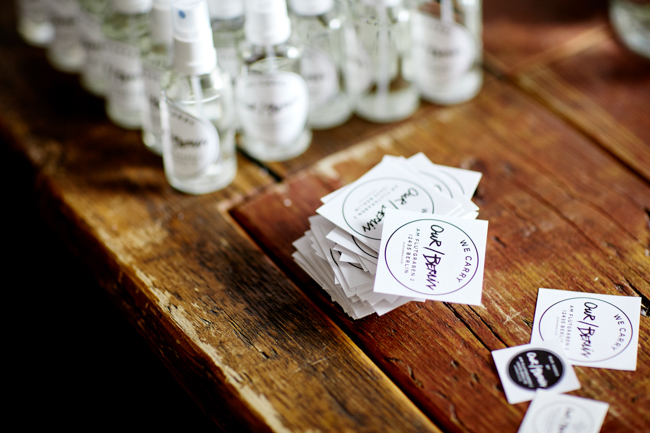 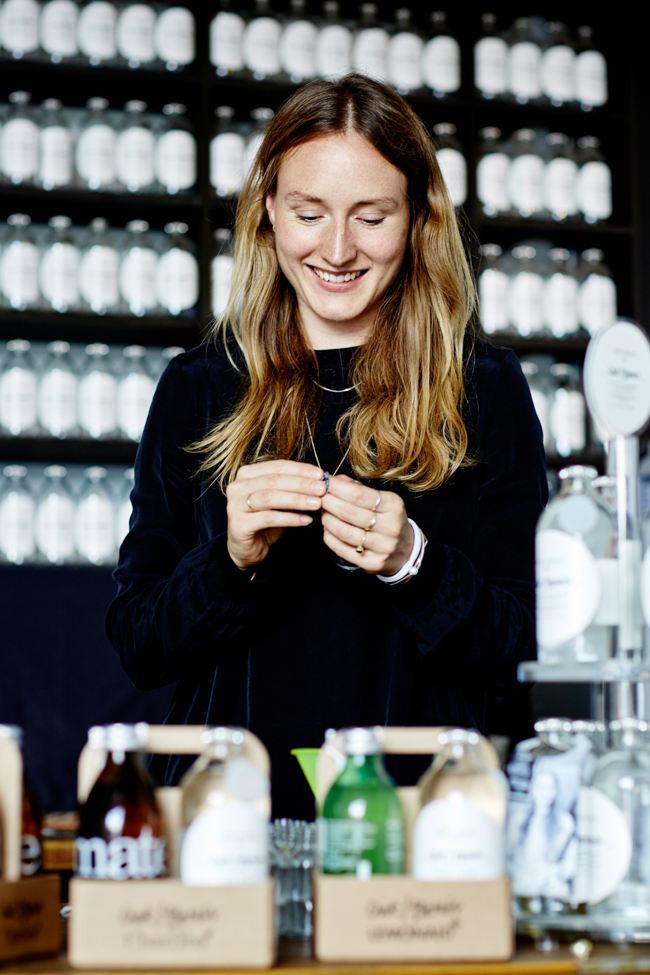