A note on the Berlin startup scene

If you have even a passing familiarity with the Berlin startup scene, you’ll have seen this blog post on The Guardian website, written by someone who recently returned to the UK after a brief immersion in the city’s tech “bubble”. Well, The Local asked for my reaction – as someone who has a lot of contact with expats in the startup world and part of the team about to open Berlin’s first tech campus – and I thought I’d share it here. Read their response “Ten points in defence of Berlin’s startup scene” here, and my comments below.

The Guardian article contains nothing we haven’t heard before. As one of Berlin’s biggest English language blogs, we attract a lot of questions and enquiries from the group to which the writer (who we know) belongs: young non-German speakers who are early in their careers, and attracted to the city’s competitive creative scene. Their observations are valid, but represent a very narrow experience of the Berlin tech ecosystem, one with fairly predictable outcomes.

If you land an internship at an English-speaking company, you are likely to remain in that bubble, speak (and hear) very little German – and you’re most at risk of losing your “job”. We know lots of people who have discovered that “the streets are not paved with gold”, and have had to move back home or onto somewhere where they can more easily lay the foundations for their career. But we also know plenty of people who’ve landed (very) real jobs at successful companies, who have stable work and are appropriately rewarded for their experience and qualifications.

We’re sick of the mainstream media cycle of hype and backlash when it comes to Berlin in general, and the startup scene in particular. No one in their right mind would believe that Berlin is the next Silicon Valley, or the only European startup hub that matters – but, equally, no one should dismiss it as just a hipster party town. We turn out innovative, productive businesses with global impact (SoundCloud, 6Wunderkinder, ResearchGate), and we’re only going to see more success like this. But we still have a long way to go…

To the Berlin startup community we say: ignore all of this. Keep your heads down and keep up the good work. To anyone thinking of moving to the city to follow their startup dreams, we say: don’t believe the hype! Follow the advice of this article and do your homework, find a company that you fit with and feel passionate about, and enter the Berlin startup scene with open eyes and realistic expectations. Good luck

Another Year in Berlin: überlin’s Highlights of 2012

Wow, what a year! It’s hard to believe we’ve been in Berlin two years – because it feels like we’ve lived here forever, yet sometimes it’s like we’ve just stepped off the plane. That’s the enduring freshness of love, I guess. Too sappy? Then maybe we’ll just skip to our highlights of 2012: our favourite moments and places, most awesome blog posts, and all the other (furry) little things that made the year our best yet. The Loxx Miniature Railway version of Berlin is probably the city’s best-kept secret, or at least it was until our photos ended up on the front page of The Guardian website. Small world(!) – on our second visit to the mini-Berlin on top of Alexa mall, we ran into Dave from the blog Andberlin – who also named Loxx as one of his highlights of the year. This is the perfect place to go on a rainy winter’s day. To celebrate Zoë’s birthday we went to Stockholm and Copenhagen and while we were there, visited the most beautiful and inspiring place we’ve ever been. Looking back at our post about the Louisiana Museum of Modern Art, I feel like my words fail to live up to Zo’s stunning photos, and even those can’t capture the breathtaking beauty of the museum and its coastal environment. We thoroughly enjoyed our short time in Scandinavia, but the Louisiana was the hands-down highlight. The first of our articles to appear on The Guardian, 5 Apps Berlin Really Needs, was a tongue-in-cheek tribute to the buzzy, bubbly startup capital of Europe. Our iProtest app concept gamified civil disobedience, while Angry Berliners turned German bureaucracy into an addictive platform game. Our Buskamatic app aside, March was a great month for music – Modeselektor released the iconic video for their “Berlin” anthem, and we discovered Big Stu’s comedy rap tributes to Hühnerhaus and Kottbusser Tor. Our personal highlight of the year has to be getting our hands on this little ball of cute. In fact, Olive is probably many readers’ main reason for visiting the blog – we might be better off training her to work a camera and a laptop and leaving her to it! The unofficial überlin mascot, Big Ö is recognised way more frequently than we are, and has turned up in the unlikeliest of places – including an Instagram tutorial video and a conversation with a Bully-obsessed stranger at my cousin’s wedding (“you own Olive the dog?!!!”). Apart from welcoming our fuzzy daughter to the fold, we also ate the meal of the year (with matched cocktails!) at Rollin Restaurant. If our May pick was a movie it would be the überlin prequel, Escape from Newcastle. While our home toon stands for everything we hate (or is that the other way around?), we still have a soft spot for the football-loving Stella-downing lads and lasses we grew up with – something we hope came across in our “origin story”, From Geordie Shore to Germany. Back in Berlin, visiting friends introduced us to the Ramones Museum, the only such institute devoted to the Detroit proto-punks in the whole world, the personal collection of a Berliner who must be their greatest fan. It might seem obvious, but our What I Know about Germans post is like David Hasslehoff’s “Looking For Freedom”: ubiquitous, infectious, and every German loves it ;). Credit for our “greatest hit” actually goes to writer Liv Hambrett, for her keen observations about her adopted countrymen, and illustrator Mischief Champion who’s busy bringing them to life for WIKAG – the book! Photo op of the month (year?) had to be Berlin Gay Pride 2012 – so many queers! So many colours! It seems like a long time since Zoë spent a boiling Berlin Fashion Week maximising her time in the air-conditioned tent, and occasionally popping outside to photograph slebs like Fashionbloggerin Miggy. Lucky for us, she braved the heat long enough to get these impressions of Berlin Fashion Week SS13. While Peaches was never exactly a reason for moving to Berlin, we’ve never been able to think about the city without picturing her merkin. Since we arrived, we’ve been lucky enough to see her twice: “doing herself” live on stage and orchestrating a protest/video shoot in support of Pussy Riot. We weren’t the only starstruck fans following this freak parade into Mauerpark, and it was impressive to see Ms Nisker whipping up a storm to publicise an important – and still ongoing – cause. Less colourful, but no less eye-opening, was guest blogger Russell Dornan’s look behind the closed doors of Berlin’s Natural History Museum. You Know You’re a Berliner When… you pose for a photo pretending the TV Tower is your penis, which then becomes a lightning rod for critics of hipsters, expats and archisexts (I made this one up). Having regular “Berlinergasms” was just one of 11 sure-fire signs that you’ve become a Berliner, along with dancing in a U-Bahn station and witnessing at least one daily act of crazy. Zoë saw more craziness at London Fashion Week SS13 – here is just a taste. October was a month of light and dark. The gloomy nights provided the perfect backdrop for the Festival of Lights and (we think) our animated GIFs were the perfect demonstration of the event’s kaleidoscopic displays. Far less joyful was Berlin Crawling: 10 Halloween Horror Films, a list of creepshows shot here in the Haupstadt, ranging from the slick (the neo-Giallo short Yellow) to the just plain sick (corpse love story Nekromantik). We’re so glad Phia agreed to be the first subject in our series of Berlin portraits. We’d heard the Australian singer/songwriter/thumb-pianist at an intimate concert in a fellow musician’s house, and loved her stories and songs about her granddad, a Berliner, and what it meant to live in his hometown. We spent a beautiful, crisp day discovering her Berlin, and sharing our love for the creative, open city we now call home. Oh, and we celebrated two years of überlin/living in Berlin! As we entered our third winter in Berlin, we thought we should share the survival skills we’ve picked up with expats who’ve recently arrived from warmer climes. With the help of Josh Bauman’s awesome caricatures of us (and Olive!), our more-or-less practical tips about How to Survive a Berlin Winter helped to restore calm among the panicky sun-botherers freaking out at the first sight of snow. I wonder if anyone’s quit their job or grown a beard on our advice? And giving away €250 of Berlin-themed swag was a great way to end another awesome year of überlin.

Join us in 2013 for more Berlin love and LOLs. Happy New Year!

We love Loxx, and The Guardian loves us! 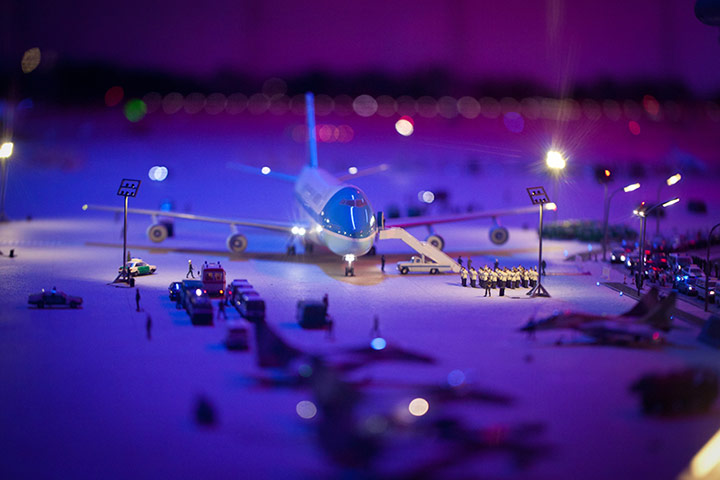 I know we post about Loxx a lot, but this is special: English newspaper The Guardian has published our photos of the miniature railway version of Berlin, and the article is currently on their front page! Click here to see if you can find the suitably teeny homepage photo, or here to see the full article – now with specially-penned captions. Big things are happening for our favourite Little Big Berlin!