We’re big fans of both Billie Ray Martin and Andy Warhol, which is why we’re looking forward to the latest project from Berlin’s “queen of electronic soul”, Five Takes (A song about Andy). BRM is unveiling Five Takes at a very special event at the Art’otel (Warhol Hotel) Berlin, who are offering a discount room rate to anyone in town for the event. But first, a few words from the artist behind the work:

Billie Ray Martin releases this 8 panel deluxe DVD, featuring five movies inspired by Andy Warhol‘s Screen Tests and printed in colour and silver metallic. The song “On Borrowed Time” deals with Andy’s fictional confession, in which he reflects on his existence and a life he always experienced as less than real. With music by electronic producer and soul singer Waterson, who is riding high on the airwaves with his single “When You Tell Me That You Love Me”.

Why not join us to see this intriguing work revealed on Thursday 2nd August? For more details, and for a peek behind the scenes of the making of the films, join the Facebook event here. To book a room at the Art’otel City Centre West for just €60, just give them a call and mention this event. See you in there. Did we mention that Warhol wigs are compulsory?*

We love Bread & Butter Berlin but we’ve been to every BBB event since we moved here (and one before that!)… we figured it was time to get someone else’s impressions of the world’s awesomest fashion tradeshow. So we sent along David Yates, from the excellent expat blog andBerlin, to check out all the action. When James and Zoë gave me the opportunity to go to The Rock – Bread & Butter Berlin’s Summer 2012 event at Tempelhof Airport – I was delighted. Not only would I get the chance to experience a major fashion event, I would be inside a Berlin landmark that I’ve been meaning to take a tour of for a while now. And I wasn’t disappointed. Walking into the main building I was immediately in awe of the monumental check in area. And walking into the exhibition space I got my first glimpse of the huge array of goods on display. I’m no fashionista but I’ve always loved clothes and I’ve got a thing for watches and sunglasses so I was like the proverbial kid in a candy store. My lasting impression of the show was the stallholders’ clever use of merchandising to represent their brands. Tote bags were popular with everyone but there were also key rings, fingerboards, water bottles and one of my personal favourites, Pepe’s mobile phone handsets (as well as their “I’m with Pepe” t-shirts). But the real stand out had to be Tom Tailor’s Polo matches, played on the airport’s apron in a sand arena with an inflatable ball. And I wonder, will rainbow coloured hair be the next big thing? Introducing Berlin Bingo! The postmodern Deutschbags at The Hipstery have nailed Kreuzberg with their bingo card covering the district, and need your help stereotyping Prenzlauer Berg and Mitte. They’re even giving away prizes! Scroll down for meegahlolz. While being away from home and the tedium of our daily routines is great, being a tourist is actually kind of lame. You wander around, look at big buildings you can’t name, consult quickly frayed maps and get sworn at by locals for getting in the way or daring to interrupt their busy days with your stupid lame tourist questions. If another person asks me “can you tell me the way to the Hauptbahnhof?”, I will bite them in the forehead. It’s that massive building that all the signs are pointing at, the signs that say “Hauptbahnhof”.

So any guide that helps give Berlin tourists assimilate and have a more authentic experience is a good thing. Of course it’s never going to be completely authentic, nor should it try to be, they are a tourists after all. But that doesn’t mean they have to be the annoying kind. 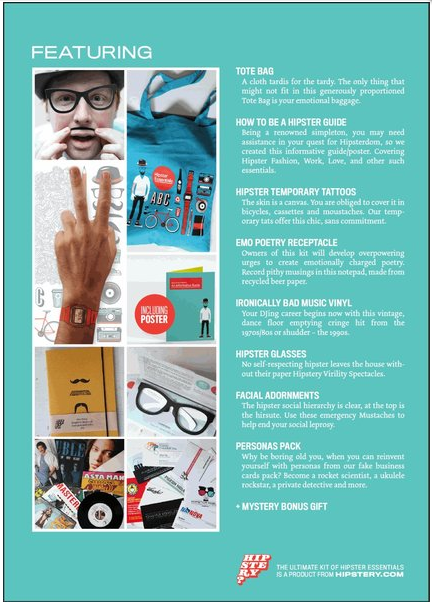 For this reason, we at The Hipstery have been working on a new product – Berlin Bingo. To begin, there will be Kreuzberg, Mitte, Prenzlauer Berg and Friedrichshain versions. Each card comes with 16 simple items/challenges to help you experience that area of the city. It can be people you have to find, places you have to go, things you have to eat. Simple. Fun.

It won’t help people find the Hauptbahnhof, but that’s their problem.

We’ve finished K’berg and F’hain cards, but thought it might be fun to ask you all for your suggestions for the P’berg and Mitte cards. We’re even giving prizes. I know, we spoil you.

Contest – Suggest entries for Prenzlauer Berg and Mitte cards. The 5 most helpful will win one of our Hipster Kits (contents shown on the right).

Of course there are many Hipsters and much Club Mate is consumed in other areas of the city, but the rules are that something can only be included once and so only appear on one card.

You have until Friday 13th July, and we’ll pick the winners over the weekend. Leave your entries as a comment to this post. We wait with enthusiasm for your suggestions… The South Wales duo are in Berlin for the MELT! Festival this weekend, and they’re playing a warmup set in Magnet on Friday. They get bonus Berlin points for getting an artist based here, Lucy Dyson, to direct their stunning videos. Scroll down to see the fruits of her labour, and to hear snippets from MWC’s heart-swell of a debut album Foe. We reckon they should just up and move here – Man Without Country are too cool for Cardiff! Playlist: Best of the Berlin Festival 2012

Is it too early to get excited about the Berlin Festival? Butbutbut… the line-up this year is actually pretty good! Gone are the Britpop hasbeens of 2011, and in their place are the hottest young indie-dance crossover bands, cutting-edge electronica, and a clutch of homegrown talent. The German scene is well-represented this year, by The Brandt Brauer Frick Ensemble, Digitalism, Raop (Rap + Pop) group Cro, and new blood Frittenbude and Etnik – as well as Berlin’s own Modeselektor, Dumme Jungs, I Heart Sharks and Paul Kalkbrenner.

All of that, plus Little Dragon, Grimes, SBTRKT, Orbital AND MORE will make for some difficult choices, but you will definitely find me front-and-centre when Sigur Rós hit the Tempelhof stage, with tears streaming down my stupid emo face. In order to get you as prematurely excited as I am, I’ve compiled a Spotify Playlist: Best of the Berlin Festival 2012 containing some of the guaranteed highlights. Click to listen or grab the link – and GET YOUR HANDS IN THE AIR!

The Hilarity of Compounds

Liv of A Big Life has already introduced us to what she has learned about Germans, and now turns her attention to the German language. With the help of illustrator Josh Bauman (Mr Caffeinated Toothpaste), she has some fun with German’s “endlessly wonderful compounds”. The German language is many things. A black hole of grammatical fun. Stubborn. Occasionally unyielding. Full of barbed traps lying under piles of dry leaves waiting to snap your juicy little leg between its genitive teeth. Possessed of absolutely no logic when it comes to assigning any of its three genders to nouns. The subject of one of Mark Twain’s most glorious ruminations.

Surely there is not another language that is so slipshod and systemless, and so slippery and elusive to the grasp. One is washed about in it, hither and thither, in the most helpless way; and when at last he thinks he has captured a rule which offers firm ground to take a rest on amid the general rage and turmoil of the ten parts of speech, he turns over the page and reads, “Let the pupil make careful note of the following exceptions.” He runs his eye down and finds that there are more exceptions to the rule than instances of it. So overboard he goes again, to hunt for another Ararat and find another quicksand.

Perhaps because learning German is such a trial, indeed a lifetime commitment for the poor Germans, many of whom get their die/der/das wrong well into adulthood and presumably for evermore, it has a few elements that prevent it from being entirely torturous, that, in fact make it rather fun. German has excellent words. Words that are gratifyingly onomatopoeic, words that are so cute you want to put them in your pocket and pull them out every now and then to sigh at.

I personally derive a great deal of pleasure from the ‘S’ section of the dictionary. Almost all my favourite German words start with ‘sch’, Schnabel (beak) being the most notable. And Schnuller (a baby’s dummy), schnuller is amazing. And schmusen (to snuggle and cuddle). But the subset of words that probably receive the greatest amount of my attention (when I should be focusing on sentence structure and plurals and articles) would have to be the endlessly wonderful compounds. No one compounds like the Germans. Oh yeah, sure, English is full of them but they aren’t particularly special. They are run of the mill compounds that pale in comparison to the ones the Germans have come up with. And I am not talking about the annoyingly long words like the one they have for ‘the hat a captain wears on a special type of boat when it is Monday and raining and he feels like eating calamari.’ I am talking about the unassuming cases when the economy of the German mentality has stretched to include simply sticking two words together to create a new one and in doing so creating a splendid (or quite horrible) visual effect.

Some words are completely logical; someone has quite literally looked at the main components of an object and stuck the two words for those components together. Oh, look, an animal (tier) that’s main feature is its bad smell (stink). Let’s call it a Stinktier (skunk). Other words are slightly less appealing, or indeed transparent, like the word for nipple – Brustwarze – which literally translates to breast wart. Why give that mother’s-milk giving teat a new name when you can simply liken it to a wart on one’s boob?

Most of my favourite compounds involve animal names which are as cute as they are funny. In fact, apart from their occasional foray into breast wart territory and unfortunate mishaps like Dudelsack (bagpipes) Germans have cornered the market on cute words. This is the language that produced Morgenmuffel to describe someone who is always rumpled and sleepy in the morning. Hell, they gave us a garden of children as the place where school life begins. Germans do cute like they do literal – with utmost ease. There are more, so many more, but die Zeit läuft (the time runs) and I must einen Schuh machen (make a shoe … don’t ask). Feel free to share your favourites in the comments below.