Berlin is awash with good food, and fast filling up with experts telling us where and what to eat. While dining out here is a joy, deciding between the ever-expanding options of eateries is anything but. So thank the stars for Peggy Schatz from the blog Multikulinarisch, who has pulled together a load of local foodies’ recommendations on one handy map. Berlin Food Info collects the culinary knowledge of bloggers like Foodie in Berlin, Slow Travel Berlin, The Wednesday Chef and, er, us, making it the only destination required for those that habe Hunger. Go to berlin-food.info or click through the image below to check it out. Guten Appetit! 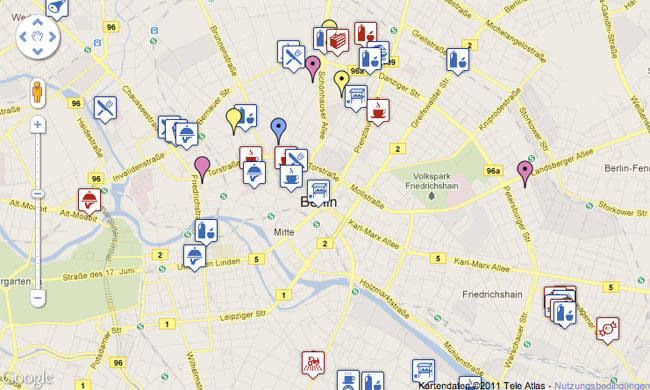 Not much German, unfortunately.
We started with good intentions. We did an intensive course for two months when we arrived, but three hours after a full day’s work, four times a week, was clearly too much German for anyone. By the end I was ready to shoot myself AND all Germans, just for the Dative case alone! Not the attitude I wanted to have with my new countrymen so a break was probably a good thing. Only now are we getting back on der Waggon – join us on Twitter where we are posting a word a day under the hashtag #dailydeutsch. A German accountant is your best friend.
With our limited understanding of German, receiving letters with official looking stamps on them can be quite scary. Opening them to see pages and pages of text, some of it bolded AND underlined, with intimidating words like “Lastschrifteinzugsverfahren” (“Direct Debit”, for God’s sake!) can be quite unsettling. After James took over three hours to Google Translate one letter which simply informed us of our tax reference number, we knew, for our own sanity, that we needed to get an accountant. Germans stare.
This one took a bit of getting used to. For the first few months we just couldn’t understand what the hell was wrong with people or, more importantly, with us! We initially put it down to the locals not being used to seeing exotic London folk like us (we’re the only ones here, right?), but we now know this is just their way and not to take it too personally. Also, I’ll win any staring contest so BRING IT ON BEATCHES!! To carry cash at all times.
Debit and credit cards aren’t accepted in 99% of Berlin’s restaurants, cafés and bars. We English are so used to handing over that little bit of plastic for everything that this was hard to get your heads around: “You don’t accept THIS card you mean, right??” Er no… So off James would go in search of a cashpoint, leaving me alone for twenty minutes, looking like a jilted lover. Lesson learned – we now carry a wad of cash that would make Tony Soprano feel self-conscious. Everything is shut on Sundays.
Seriously, everything – supermarkets, clothes shops, IKEA…the lot! This can be frustrating when you haven’t got any food in the cupboards or desperately need to buy that new oven mitt, but when you get used to it, it can actually work to your advantage. Sundays are now perfect for that lovely stroll along the canal, cleaning up the house or doing all those odd jobs you keep putting off. Or even better, going for brunch and then off to pump some fists in the air at Berlin’s best club Berghain! Ahead of this week’s panel discussion The Detroit-Berlin Connection I wanted to post the best track ever to come out of Motor City. Easier said than done, with friends suggesting everything from Motown to the MC5, J Dilla to detroit techno. Struggling with what @RichardKovitch called an “impossible task” (“Difficult to think of any City in the 20th C with a musical legacy quite as immense as Detroit”), I went with the obvious – techno anthem Strings of Life:

Rather than trying to describe the track and its impact, I’ll leave that to creator Derrick May and fans Doves and Hacienda DJ Mike Pickering:

Strings of Life has been reinterpreted many times, but the closest I could get to a Berlin version was this take, from Munich producer Christian Prommer’s Drumlesson. I know, not very close at all (sorry Germans!), but still – shuffling jazzy goodness:

But my absolute favourite version of Strings is this solo piano version from Francesco Tristano Schlimé, who has also covered Jeff Mill’s The Bells and recorded at Planet E Communications, the studio owned by current king of Detroit techno Carl Craig:

If you want less plink-plonk and more donk-donk, check out this “Detroit Berlin Mix” from Nat Alexander, which features tracks from Motor City maestros Mills, German counterparts like Basic Channel, and cross-pollinations between the two cities:

The Detroit-Berlin Connection is a panel discussion on urban renewal in post-industrial cities. RSVP here and join us.

When we moved to “Kreuzkölln” (ew) seven months ago I would bemoan the lack of decent coffee this side of the Landwehrkanal; now it seems like every other street has an excellent café. Competition is fierce for the title Best Coffee in Berlin, so let me word this carefully: Katie’s Blue Cat produces the smoothest flat white south of Mitte… if you get lucky with the barista. It doesn’t kick like Passenger Espresso‘s double-shot caffeine bomb, and neither is produced as consistently as the velvety creations from The Barn…

Anyway, the real draw at Katie’s is their baked goods, all made in-store. We’re steadily working our way through the range of cookies, flapjacks, cheesecakes, and one-offs like chocolate and peanut butter pie and, on Thanksgiving, pumpkin pie. While our waistlines suffer, our tastebuds rejoice – and we’ll frequent the Blue Cat until we can’t fit through the door. And then we’ll switch to their delivery service(!), until our fingers are too fat to dial. But don’t let the image of our impending morbid obesity put you off – get down to Katie’s Blue Cat for sweet coffee and even sweeter treats. Let me introduce you to my favourite designer – all hail Sir Alexander of Wang. The man just gets me, with his tough yet subtle aesthetic, quirky detailing (studs on the BOTTOM of bags – hello?!!) and his love of black. His clothes, and especially his accessories, are always on my wishlist (take note loved ones in need of ideas for Christmas!) and he’s one of the only designers I’m willing to part with my hard earned cash for. For him I will unashamedly make absurd justifications like, “it’s an investment piece” or “when you consider I’ll be wearing it every day, it’s really worth it!!” An early Christmas present to myself (you really can’t rely on those loved ones) was a pair of boots from his Fall Winter 11-12 collection. With only a small window before the Berlin snow starts falling and these babies are relegated to the spring, I might have to resort to wearing them in the house with my PJ’s… well I’ve got to get the wear out of them haven’t I?!! If you’ve read anything I’ve ever written about Bon Iver, you’ll know I’m a big fan of people holing up in cabins to make heart-rending music. That’s how this project from Albequerque art school dropout Brandon Bethancourt got its name, and the frozen-tears aesthetic so suited to his sometime home, Berlin. I love this emotronic ode to the city, the lo-fi retrofuturism of its video, and the comedown expressionism of its lyrics. I love the fact that the act’s official website opens with a letter to the fans, all about the struggle to make this music, and confessing to feelings of despair and thoughts of suicide. I especially love that letter’s conclusion: “I thank you all from the bottom of my heart for opening my eyes and showing me the love and beauty which I was blind to for so long.” I give you: Alaska in Winter.

oh my Berlin, always my friend….

A Thank You Note

Wow, last night was great! We just wanted to say thanks to everyone who came down and helped us to celebrate our first year in Berlin/a year of überlin. We had a great, drunken ol’ time, and hope you all did too. Allow us to get all Oscary for a moment and thank all the people who “made this happen”:

Matt at The Black Lodge, for letting us do exactly what we wanted, putting up with a playlist that descended into dub narstiness (Spotify link, sorry!), and keeping the G&Ts, picklebacks and espresso martinis flowing into the early hours. Prost!

Foodie in Berlin for making our birthday cake. Forget us, this was the real star of the night – a chocolate two-tier cake with a cocoa nib mint middle, mint icing and Oreo cookie crumbs. I’ve started salivating just describing it, and it’s only been a few hours since my last slice! Thank you Suzan for making it, delivering it, and refusing to let us give you anything in return. You gem!

Nicole is the New Black for bringing along more cake! Red velvet cupcake omnomnoms, to be exact. Party: Yankified! Capital Sister Raquel and her capital boyfriend Davide for the kind gift of some limoncello actually made by Davide’s dad. Salute!

Paul from Slow Travel Berlin for the gift that keeps on giving (liver disease), a copy of Around Berlin in 80 Beers. I love that all of our gifts consisted of either baked goods or booze. You guys just *get* us!

Everyone else! Seriously, without you there would be no überlin! Actually seriously, the warmth and openness with which we’ve been welcomed here has made Berlin really feel like home, and the past 12 months the best year of our lives so far. To many more!